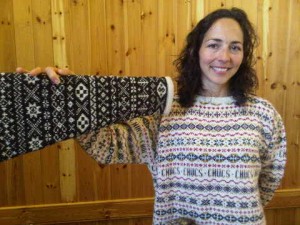 Mati Ventrillon makes Fair Isle sweaters – the modern way.  Most of her products are customized, via her website, and using flat-knitting as well as traditional needles she can produce a sweater like this in under 18 hours.

She is a fascinating person in her own right, fashion by a French-Venezuelan woman here on Fair Isle, way north of Scotland.  The gal called in, on this fascinating Silver Explorer luxury voyage. 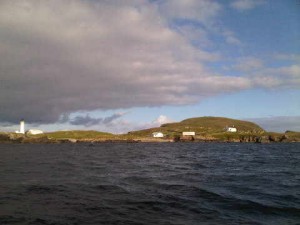 Fair Isle in first light looked good, even from the start.  It was not raining, which boded well.  Look out west from the ship and there is the island, 3.5 miles long by about 1.5 miles wide.

There are undulating hills, running to cliff tops or down to sandy or stony beaches. There is not a single tree in sight, anyway.  To the southern end is one of two lighthouses, imaginatively called South, and North.  In 1954 the last private owner of Fair Isle, George Waterston, sold it to the National Trust for Scotland.

The Trust owns the entire thing, lock, stock and barrel, and apparently it interviews all applicants for the crofts (farm houses), which are rent-free. 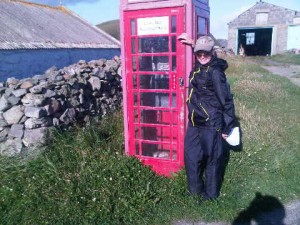 Fair Isle has a telephone box …

The 68 permanent residents include a priest, a nurse, and a shopkeeper – and all the knitters. Six of the islanders are primary school age and a new, male, teacher arrived last month, from Toronto (he saw the job advertised on The Guardian’s website).

Older students are weekly borders in Lerwick, returning for the weekends here by Loganair, which operates seven-seat Islanders. Some of the crofters, as the residents of the crofts are called, run their small-holdings with commendable lines of vegetables, and pens for chicken: one even has a small field for black pigs which are rooting deep.

There are wind turbines on a couple of hilltops. Electricity and telephone wires are all underground. One old-fashioned red telephone box remains. 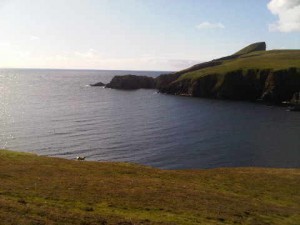 .. and a hundred percent beautiful landscapes

The landscape is absolutely beautiful, and one would never tire of it. It is dotted with crofts, and there are two churches, one a Methodist Chapel, the other Church of Scotland (this latter, with two beautiful stained glass windows flanking the altar and soft green carpeting for warmth, houses the island library which, I noticed while singing ‘Tell me the old old story’, includes a hardcover tome on “Hitler’s Secret Library”).

Bird life includes gannets, guillemots, puffins and razorbills and ever since George Waterston set up the first ornithological conservancy in 1948 this has been a recognised place to watch and record migratory birdlife.  September and October are the best times to see these transient visitors, and tourism by humans is actually increasing. 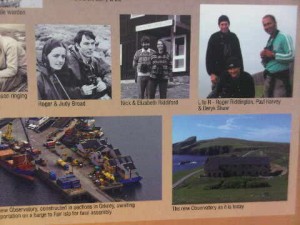 Up to 40 can stay, April through October, in the commendably comfortable Fair Isle Bird Observatory and Guest House, a superbly environmentally-aware two-floor structure that was built in Lerwick and transported here in sections, lego-style, to be put together on site. (Memories flood back of Vladivostok’s unique Vlad Inn, designed and made in Edmonton and shipped from Alberta to be riveted together in its Russian-seaport setting.)

Year round, the Royal Society for the Protection of Birds – a charity that is even richer as the National Trust for Scotland thanks to legacies from little old ladies – year round, the RSPB has one ornithologist here on Fair Isle, and he has three volunteer helpers during the summer. 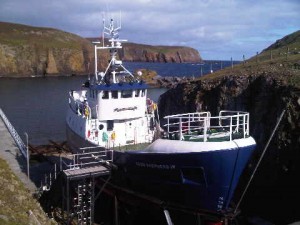 As well as airlift between Fair Isle and Lerwick, there is the Fair Isle Ferry, the Good Shepherd IV.  Four crew live on the island and weekly, year-round, with additional sailings in summer, the sturdy little vessel makes what can be a washing-machine journey across to the Shetlands, Grutness for Sumburgh, and Lerwick.  Ask an Islander why she needs to go to Lerwick occasionally and she might answer, to have her hair cut. 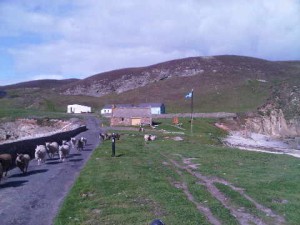 Thousands of sheep have free run of the idyllic island

Sheep, thousands of them, have free run of the island. Ownership can be established by looking at rings in their ears, but this seems to be a crime-free island.  There is no sign of G4S – which coincidentally looked after security at Bergen dock – or of a policeman.

The church’s money collection is via an open plate in the building’s outer lobby.  The half-dozen vehicles on the single-width road are left unlocked, even when they are full of fishing and other essential supplies. 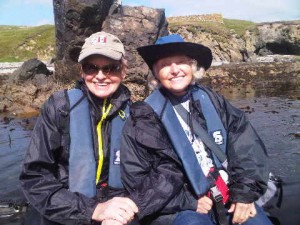 All too soon, it was back on the zodiacs to return to Silver Explorer

We only had three and a half hours on Fair Isle, and that included lots of walking, lots of talking and, for anyone who had room, home-made Scottish shortbread and tea in the Community Hall.

This, incidentally, is another splendid well-built, modern structure, showing that the National Trust for Scotland invests in quality.  It also sensibly attached to the school, so Mr Toronto can use it for his students’ exercise classes.

Not every day here on Fair Isle is as fair as this.  We got back in the zodiacs, and watched grey seals cavorting as we made our way back to the Good Ship Silver Explorer.