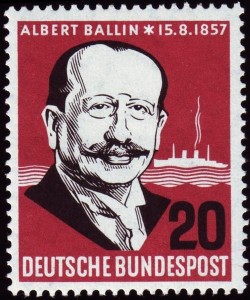 Albert Ballin, 'inventor' of cruising, had a German postage stamp commemorating the centenary of his birth

Luxury travel in days past was as seamless as a gal would like it to be today. In 1899 Albert Ballin, General Director of the Hamburg-America Line, commissioned the first purpose-built cruise liner, the Prinzessin Victoria.

He wanted his First Class passengers to rest in style before they boarded at Hamburg – so in 1909 he built a hotel.  This is now the fabulous, 242-room white-wedding-cake Hotel Atlantic Kempinski, a five-floor building with lots of exterior columns (also white) dominating the south-west corner of the Alster lake.

Although it is 30 miles inland from the sea, which is reached by the Elbe river, Hamburg is Europe’s third busiest port – after Rotterdam and Antwerp. 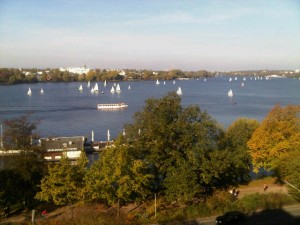 View of the Alster See, and a regular ferry, from room 420

The ‘sea’ is everywhere. Look out of one of the windows in room 420 and you have a panorama of the lake, with ferries that take you from one landing post to another, and perhaps a flotilla of sailboats.

Dine in the Atlantic restaurant and one of chef Thomas Wilken’s menus is exclusively seafood (apart from dessert, of course). You could start with a trio of smoked eel presentations, including a slab of it delicately sandwiched between beetroot.

You might continue to an Atlantic Classic, sole meunière skilfully filleted table-side by the restaurant’s Maitre d’ Wilfried Kopf – what a character, ‘welcome to MY restaurant’ he says, smiling at the Captain of the Atlantic, also known as GM Peter Pusnik. 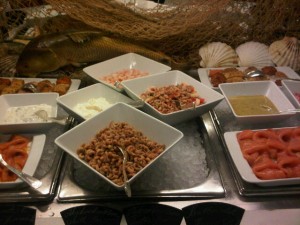 Kopf pours the girl a flute of pink Alfred Gratien Champagne (interestingly, this is one of the few German-owned Champagnes – it is part of Dr Oetker’s massive portfolio, which also includes Schloss Johannisberg from Rheingau).

Back to the water. Where else in the world do you find a breakfast buffet that includes an entire cart of seafood bits, from tiniest shrimps up to solid fish?  And of course, being Germany, the bread selection excites even this breadaholic.

After that I borrowed one of the hotel’s Townie bikes, and cycled around Alster. There must have been at least 500 runners, joggers and cyclists doing the same five-mile circuit. 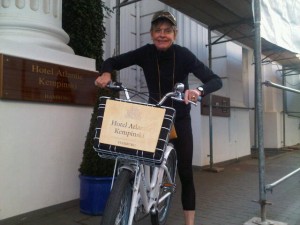 There were even two old ladies, one in a fur coat, pushing bikes around (that is a new exercise, surely).

Returning home, I was greeted by the Kaiser, or at least his full-size likeness, painted in blue on tiles that rest above the working fireplace at the back of the hotel’s lobby.

Later in the day, the adjacent bar will be full, with a guy playing the grand piano and happy locals sitting up at the counter, eating one-bite eel, North Sea shrimp and wolf-fish canapés.

A wow-blue light diffuses through the ceiling of the indoor pool, which is a steel box about 60 by 30 feet.

The sauna encourages the ultra-fit – because this is what the typical Hamburger seems to be – then to head to the adjacent outdoor terrace, looking down at the Alster. 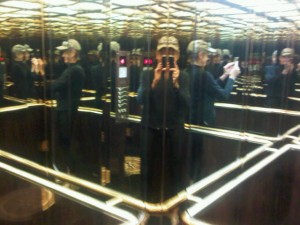 YOU try photographing in an all-mirrored elevator! 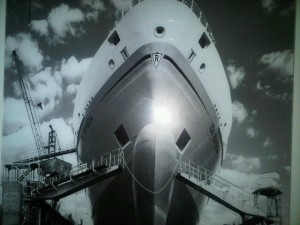 A back massage seemed to be called for after all this exercise (the oh-so-white treatment room of course, being Germany, had windows that open, to look at the Alster). I took the all-mirrored elevator back up in 420.

Before I leave I notice the ocean-liner photograph in the bathroom.  Without Ballin, we cruise addicts would not have Silversea or any other cruise ‘fix’. I feel like sailing away, now…