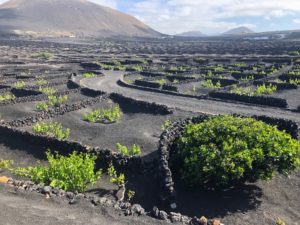 From time to time the gal embarks for a luxury stay at sea. Cruise ships have similarities to luxury hotels on land, but of course they move, giving plenty of different location experiences. This itinerary on gorgeous Regent Seven Seas Explorer, for instance, went from Lisbon to Barcelona via Madeira, the Canary Islands, and ports of call in Morocco and mainland Spain. The Canaries – named for dogs rather than birds – included the unusual Lanzarote, an island more or less exclusively formed of volcanic lava and ash. Highlights were a Disney-like tour through lava fields around Timanfaya volcano (see a video below, and look at steam escaping, above). Lanzarote was named for an Italian, Lanzarotto (or Lancelotto) Malocello, who discovered the island in the early 14th century.  Its activities today include production of aloe vera, and also wine, from vines individually bedded right down into the ash to reach fertile soil beneath. 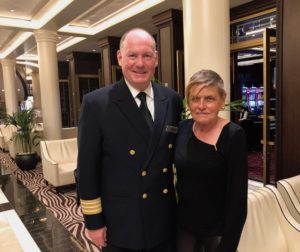 Between sightseeing and constant education of what happens wherever in the world, I was back on board. Regent Seven Seas Explorer, built in 2016, is the perfect example of today’s maxim that luxury requires space. The ship has 750 passengers in an overall space that could probably accommodate twice that number – cabins, called suites (technically correct in that there are curtains that can separate bedroom from living area) have big terraces with loungers as well as upright chairs. There are so many bars you never have to rush to get a sit-up-at-the-counter stool. Other than the sailing part, the whole operation was run by a GM, Michael Coghlan, who unlike his land-based colleagues works seven days a week, from about 7 a.m. through dinner with a few hours off in the afternoon – and, after three months on, he does have two months’ leave. 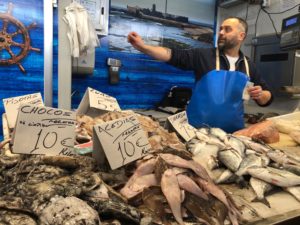 The food onboard was superb, with copious buffets at breakfast and lunch, for those who, like me, prefer helping myself at those meals. Of the many dining choices, my favourites were, surprisingly, the general-menu Compass Rose, which has superlative service, and the finesse and exquisite food of Chartreuse, the French fine-dining.  This could, possibly, have been labelled a ‘foodie cruise’. We had father-and-son Michel Roux and Alain Roux onboard (the Explorer has a fully-professional cooking-class kitchen, thoughtfully with glass walls so others can see what is going on).  In Madeira I took afternoon tea. In Tenerife I was fascinated by salt-crust cooking. In Cadiz, the fish section of the main covered market, held daily Mondays to Saturdays from dawn to about 2 p.m, was a true educational eye-opener. 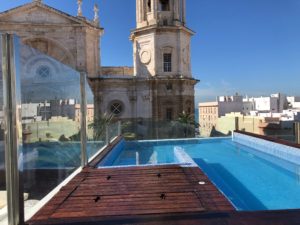 I loved Cadiz (pronounce it as near to ‘Cardiff’ as you can): it has narrow streets and a plethora of narrow shops that specialise in hams and ladies’ shoes. The cathedral has a cavernous catacomb beneath that still has masses of space for saints to come. This is a highly religious city, and just before Easter religious groups parade every night, carrying mighty treasures from the cathedral around those eight-foot wide streets. One of the best viewing places must surely be a luxury hotel I discovered purely by accident, the 14-room Hotel La Catedral, right opposite the cathedral. From its fourth floor rooftop, take 20 steps up to its glass-sided pool. What a clever feature. NOW LOOK AT SOME VIDEOS, THE SHIP, FLAMENCO ONBOARD, AND, OFF THE SHIP, A LAVA DRIVE THROUGH LANZAROTE, AND CADIZ MARKET