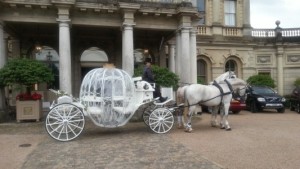 Could anyone, any age, any nationality, fail to feel like the Belle of the Ball, or Bride of All Time, being transported in this glorious glass coach? Even more exciting is that it belongs to one of England’s most glorious stately home luxury hotels, Cliveden. The entire estate is 376 acres, and the first house was built 1660 for the Duke of Buckingham. Both it and its successor burned down, says the gal, and what we see now was built 1851 for George Sutherland-Leveson-Gower, the second Duke of Sutherland. In 1905 it was given to Waldorf Astor as a wedding present…. some gift. 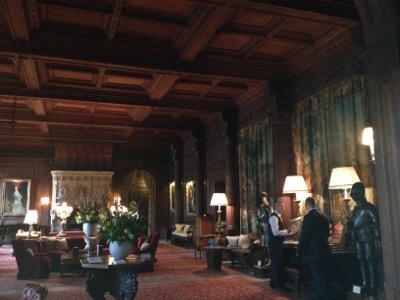 His bride was Nancy Longhorne Shaw, an American who had come to England, with her small son, to find her fortune, which she did, and then a title. Waldorf Astor had to succeed to his father’s title (he became Lord Astor), and thus give up the parliamentary seat he was contesting. His determined wife, a Christian Scientist who had six children in all, fought and won it instead. Thus she, an American, became the first female MP in the UK parliament. Her portrait, by John Singer Sargent, is at the rear left of this photo of the Great Hall, where pre-booked afternoon tea is a full house, daily. 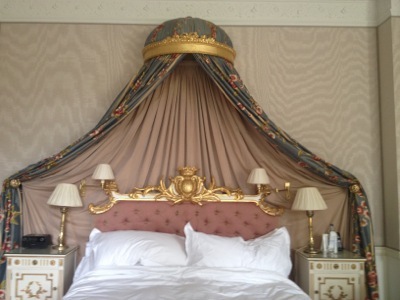 Heritage bed in the Sutherland Suite

Staying in what is now a 39-room hotel is true Downton Abbey in the countryside. This is the bed in the Sutherland Suite, redone by designer Mario Nicolaou. As in the old days, has my name, beautifully written in italic script, in a brass holder outside the door – I almost expected to find a china chamber pot, with coat of arms of course, under the bed). Yes, there are antiques and portraits in the room, but the mattress and linens are superb, and WiFi is faultless. I was also able to nip across the front courtyard of the hotel to the 24/7 spa, with latest Technogym. 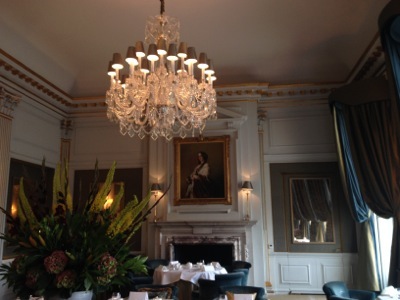 Imagine breakfasting (and dining) in such splendour…

We started dinner with a Lady Astor, a non-alcoholic Blue Curaçao syrup, with apple and lime juices and brown sugar (go for Lord Astor and you get Jim Beam with additives). The chef, André Garrett has revolutionised cuisine levels to a par with Raymond Blanc, Heston Blumenthal and Michel Roux MOF and other ‘English Home Counties’ culinarians. His food is fresh, say a salad of summer vegetables, leaves and herbs goat’s milk purée, and crisp pheasant egg to start, followed by roasted wild sea bass and baby artichoke barigoule. Breakfast is in the same glorious chandeliered room, its panelled walls hung with ancestral portraits.

.. looking out over the gorgeous gardens

And in the morning, of course, you can look out over the terrace at the parterres on that part of the lawn. Not far ahead is the River Thames: this is a luxury hotel that comes with a its own boats for leisurely cruising, and if you really want to be beside the water, book the three-room river’s edge Spring Cottage, where Queen Victoria used to come for her afternoon tea. Among many memorable things I recall from my visit were the house daily newsletter with its Coco Chanel quote, ‘in order to be irreplaceable, one must always be different’, and talking to the super staff, who really are like palace retainers. How I wish I could be back at Cliveden on October 19th, 2014, when Liza Goddard and Robert Powell entertain at a black-tie dinner celebrating a century of cinema…