What on earth is David Bowie, or at least UK former-sculptor Joe Black’s portrait of him, formed of thousands of test tubes, set side by side and filled with different inks, doing in Athens’ 1936-vintage luxury hotel that was named for King George II of The Hellenes? Well, when the owners of the neighbouring Grande Bretagne (GB) took over management of the King George, they put in some of their own art collection, including this. In the main, says the gal, the King George’s new look, done by Alexandros Samaras, is exquisitely classical. 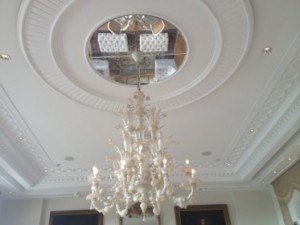 A typically elegant chandelier in a magnificently-refined lobby

Alexandros Samaras replaced an unexciting lobby bar by simply opening it up, making a large lobby with a glorious multi-greys marble floor patterned to look like the finest of silk rugs. Alexandros Samaras, who happens to be the brother of Greece’s Prime Minister, Antonis Samaras, is a philosopher. Design should be diachronic, timeless, and the result, he says, must be inevitable. He remembered this hotel from his childhood, and he wants to make it once again a setting for people with aesthetic taste. Apart from David Bowie, you could almost say it is understated, with lots of nuances (see how the ceiling mirror reflects the beautiful marbled floor). 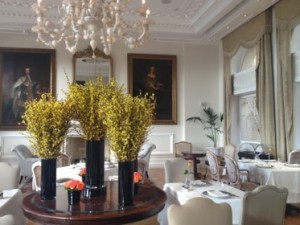 Samaras has turned the Tudor Hall restaurant into perfection

I remember the hotel’s seventh floor Tudor Hall restaurant as columned, befitting its name. Now Tudor Hall is as elegant as anything I have seen for ages, a haven of white and ecru. What, by the way, is the difference between this hotel and the neighbouring GB? While the GB is golden hues, here it is silvery white. We had dinner here, kicking off with a eulogistic confection, two halves of smoked eggplant hollowed out and mashed, tableside, with chili, onion, pepper, vinegar and parsley, and the ubiquitous olive oil. What to drink? Try Epilegmenos Rapsaki Grand Reserve 2008 by Tsantalis, Rapsaui, which is a blend of Krasato, Stavroto and Xinomavro grapes. 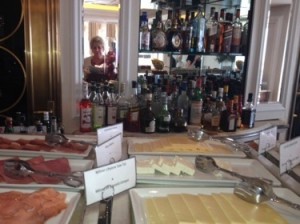 Breakfast is set out in Tudor Hall’s bar

Tudor Hall has an Acropolis view that is only ten feet lower than that of the GB’s Roof Garden restaurant. Alexandros Samaras says he knew he had to accentuate the view, and to make the whole interior as light as possible. Breakfast is served in the Tudor Hall’s bar, but most then choose to sit in the luxury hotel’s adjacent ‘conservatory’, just to gaze. Yes, there will be even more tourists coming to Athens this coming year, certainly if the energetic Minister of Tourism, Olga Kefalogianni, has her way – and the keen airline Aegean, which has more or less gobbled up poor old Olympic, has just announced another 16 international destinations, in ten countries. Watch this space.