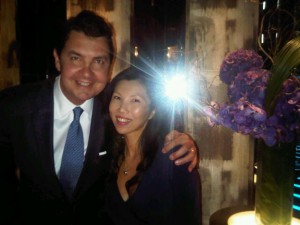 It has been Ricco DeBlank’s week and no wonder he and his wife Virginia have stars in their eyes.  One of ‘his’ hotels, the Ritz-Carlton Shanghai, Pudong, is listed in the November 2011 Condé Nast Traveler as best hotel in the world, according to that magazine’s stated 28,876 readers.

Of course a girl asks the question, how many have actually been there? Even if only a dozen have, they would still put it right up there at the top.  Ricco DeBlank heard about this award at the beginning of the week.

The world's tallest hotel - at 118 floors

Then, at the end of the week, it was announced that another of ‘his’ hotels, The Ritz-Carlton, Hong Kong, has won the Reggie Shiu Development of the Year Award at the top Asia-Pacific-International hotel conference (HICAP Hotel Investment Conference Asia Pacific) at the splendid Hotel InterContinental Hong Kong.

When talking about ‘his’ hotels, a girl needs to be accurate.  Ricco de Blank is CEO of Sun Hung Kai Hotels, a division of the world’s biggest real estate owner, Sun Hung Kai Properties SHKP, owned by the Hong Kong-based Kwok family.  Ricco oversees not only the two hotels above but such other treasures as Four Seasons Hotel, Hong Kong, and W Hotel Hong Kong.

To celebrate the success of his spectacular hotels he threw a little dinner for close friends in Tosca, on the 102nd floor of The Ritz-Carlton, Hong Kong.  Yes, 102nd floor.  This is the world’s tallest hotel, soaring 1590 feet, 118 floors up in one sculpted tower… 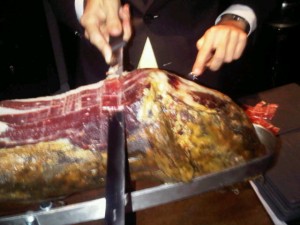 I stayed, in room 25 on the (mere) 112th floor, and traffic below looked like dots.  Loved the ESPA (116th floor) with a 20-yard swimming pool with working fire, and partly open to the air gym, both on the 118th floor.  Yes, one gets quite blasé about the height.

Dining in Tosca’s private dining room was an inside luxury experience.  You are ushered, with the grace of New York City Ballet’s best, into a room which would have these stupendous views were it not dark, and you are too high to see any of Hong Kong’s magical night-time lights.

Twelve of us sat around a giant pale avocado-covered oval table under 14 low-set maroon lamps (I was next to designer André Fu, whose fabulous Upper House interiors are lots of pale avocado). 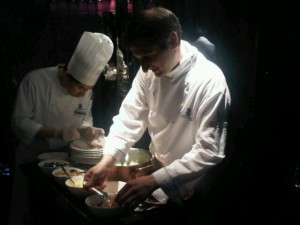 I chose slow-roasted fillet of veal, Vittorio chose – and prepared – individual slate-plates of Gorgonzola and Barola- and truffle-scented cheese.  My neighbours proceeded to Tosca tiramisu…