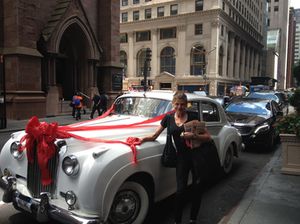 Weddings are big business. Look at the SundayStyles (sic) section of the New York Times every Sunday. The couples’ ages are given – typically both in their ‘30s these days. The gal reads about their parents. This week when Gregory Ronald Alcock, 34, senior director for fund-raising at Brookings, married, his father, the Mayor of Geneva NY, became a Universal Life minister especially for the ceremony. Of course when you see a bedecked and be-ribboned white car outside a luxury hotel  of the calibre of The Peninsula New York you assume it is for a wedding.. 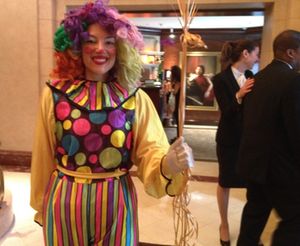 But I am wrong. Today’s celebrations at this glorious hotel are for a birthday, and a clown awaits. Even the most sophisticated of great establishments enjoys a bit of fun and here, certainly, all the managers and others around found the clown most entertaining, as clowns are supposed to be. I was at the hotel to be entertained over lunch, in the house-like Clement restaurant, designed by Yabu Pushelberg (areas are semi-separated and we were in the ‘library’, its walls real books set, without covers, side on, the fore edges, opposite the spines, thus facing out. It did indeed turn out to be a highly entertaining lunch. We talked about the possible revival of Lifestyles of the Rich and Famous – I had found out only last week, in Las Vegas, that the show’s host, Robin Leach, is still doing something similar there for the Nevada types. 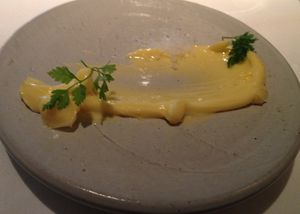 The new series, however, may well have Mariah Carey’s husband Nick Cannon as host. He can start, presumably, by looking at his own lifestyle. Bet he and Mrs. C do not have the artistic confidence to present butter like this. When it appeared on our table at the packed-full – yes, even in August – Clement restaurant, I nearly sent it back. No, said the waiter, this is how we do it, scraped as an artistic swish. The conversation changed to the annual Bonhams car auction, which was a highlight of The Quail, A Motorsports Gathering, at Peninsula’s Quail Lodge, Carmel CA, starting on August 14th. 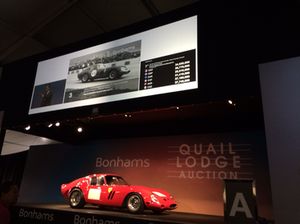 And another car, going for $38 million

In all, $106 million was generated over two days. The star performer as including a Ferrari 250 GTO that went for $38 million: an anonymous collector, bidding by telephone, won this last front-engine competition coupe built by Ferrari. It had belonged to Italian amateur driver Fabrizio Violati and it had to be rebuilt, by Ferrari, after former French Olympic ski champion Henri Oreiller was killed driving it in a race at Montlhéry in 1962 – it is therefore dated 1962. Ferraris are obviously big right now, especially in California. The Quail, A Motorsports Gathering, is deliberately timed to link in with the annual Pebble Beach Concours d’Elegance, when best of show was deemed to be the 1954 Ferrari 375 MM Scaglietti Coupe owned by Jon Shirley, Medina WA. 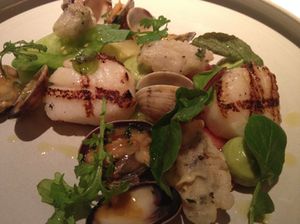 And my seafood salad

I hope Maria Razumich-Zec, who runs another of Peninsula’s fabulous luxury hotels, the Chicago one, enjoyed the car show. I am thinking of her right now, enjoying chefBrandon Kida’s seafood salad, here at Clement. It is her favourite, she says.