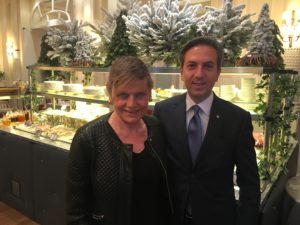 The gal is, like so many, fascinated by the history of iconic luxury hotels. InterContinental Carlton Cannes Hotel is one of those featured in Rooms with a View: The Secret Life of Grand Hotels, Adrian Mourby. Briefly, Cannes was established as a vacation resort by English politician Lord Brougham and Vaux in around 1834, and the wealthy Russians followed. The hotel, which opened 1912, was the idea of Grand Duke Michael Mikhailovich, brother of Tsar Alexander III, who had to flee Russia if he wanted to live with Pushkin’s granddaughter – the Grand Duke worked with Henry Ruhl, who had already established Carlton hotels in Biarritz and Paris. This Carlton was designed by Charles Dalmas, with kitchens by Escoffier. No wonder Giovanni Vincelli, who took over as GM on April 4th, 2017, is so proud to be here. 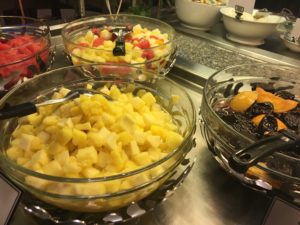 This is a hotel, he knows, that had such early patrons as the Prince of Wales, and Grand Duke Michael’s cousins, Grand Dukes Nikolay and Peter Nikolayevich – all three, presumably separately, said to be lovers of frequent guest, Spanish dancer and renowned courtesan Carolina Otero, whose breasts inspired the name of the hotel’s two rooftop cupolas. Nowadays, during the annual film festival, of course, lots of big names stay here – the hotel’s Prestige Suites are named for such greats as Sean Connery, Grace Kelly, Sophia Loren and so on. During the annual ILTM, December 2017, such luxury travel names as Jack Ezon held court here: participants at his brilliant futures think-tank, in a sixth-floor suite, included the President of Skift and the Publisher and Editor of Travel+Leisure. 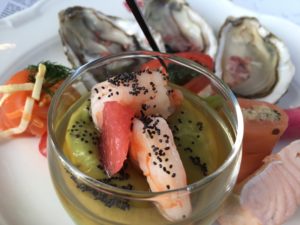 .. and a brunch dish

I overnighted superbly, in room 515, and ate magnificently, always in The Carlton Restaurant, the only main dining venue apart from the summer-only Beach Club. Not be missed is Sunday brunch, packed out with chic locals, who know that, once the doors are opened at 12.30, this is the place to be – see a video, below. Giovanni Vincelli has cleverly made the popular outdoor terrace, right on the Croisette, into a year-round venue. It took four days to construct a superior pop-up tent, with clear walls and slightly peaked roof and, of course, interior heating. This, now, is the most popular xxx?seating place, for all meals. Since Giovanni Vincelli has achieved this hotel enhancement in a relatively short time, what will he be up to next? We can expect him to stay a few years, fortunately. 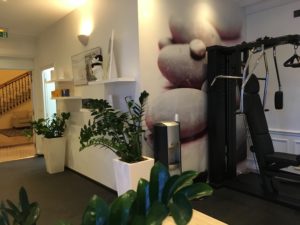 He used to think that three years was long enough in any hotel but now he doubles hat. It takes time to become part of the outside community, to understand culture, and to perfect a work force into a team that plays together as magnificently as, say, the Berlin Philharmonic. Soon Giovanni Vincelli will see Katara Hospitality, owners of this luxury hotel, announce renovation plans, somehow without closing. Rumour has it that as well as lots of fresh coats of paint, inside, there will be more lush suites, more rooms and even a subterranean conference centre, but rumour may be fake news and until Katara says what it has decided no-one knows for sure. NOW SEE SUNDAY BRUNCH