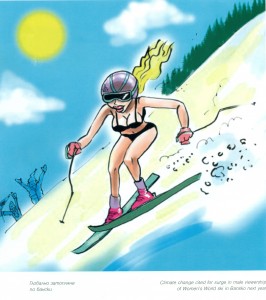 But January 26-27, 2012, should see no less than HSH Prince Albert II of Monaco gliding down some of the 75km of ski slopes, together with Princess Charlene and possibly his nephew, Pierre Casiraghi.  They will be in town for celebrity ski races to benefit the Monte Carlo Foundation charity.

It seems that this has come about because the Chairman of Bulgaria’s Ski Federation is the brilliant all-rounder Tzeko Minev, who also happens to run Bulgaria’s biggest home-grown bank, First Investment Bank,  plus Bansko’s mammoth gondola ski-lift and, conveniently at the lift’s base, the super-duper Kempinski Hotel Grand Arena.

As soon as I arrived at Bansko, which is 2.5 hours’ drive south-west of the Bulgarian capital, Sofia, I took one of the hotel’s beautifully-maintained mountain bikes and headed up the winding tarmac road.

I rode and rode, 45 minutes up, and 15 minutes down (next ride, I went off-road, following one of the many forest paths).

This luxury hotel, Bulgaria’s only Leading Hotel of the World, is like one mammoth Alpine chalet that, like Topsy, grew and grew, but outwards.  Each of the 159 rooms looks like a chalet interior, too. 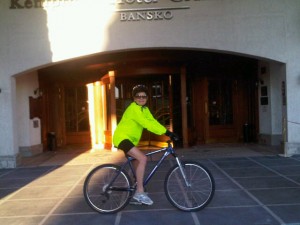 Room 353, a ‘Junior Suite’, is a one-room haven, white-harled with knotted-pine wood for doors, desk-table, cupboards and a corner table that slots into the L-shaped fixed seating, chalet-style.  I loved having a diagonally-set skylight, and French windows opening on to my private terrace – to look down at the ski-lift base, and one of the hotel’s two outside pools, and the distant mountains beyond.

This is a superbly comfortable hotel. There is also a big indoor pool, two communal hot tubs and tennis and spa about to be rebranded Kempinski The Spa. 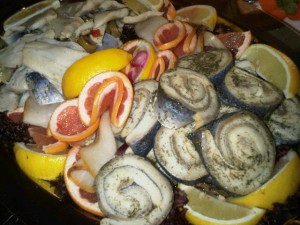 I salivated over the home-made Bulgarian yoghurt and lightly-poached sugar-free strawberry compote, and a server discreetly asked me if I would like ‘really fresh’, squeezed just for me.  What a lovely, and royal touch.   And the hotel’s super-Swiss GM, Orlando Stefani, sent me on my way with just-baked cookies.