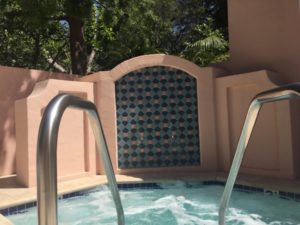 Jacuzzi on the private terrace

What looks like an adobe cottage in Arizona, above, is in fact the gal’s little home at the exquisite Hotel Bel-Air, in Los Angeles. It all started thanks to Alphonzo Bell, 1875-1947, oil multi-millionaire, real estate developer, philanthropist, and champion tennis player. He bought 600 acres of land here, to develop the Riviera Country Club, which somehow grew from its 1922 beginnings into what is now one of the world’s pre-eminent luxury hotels. Each of its 103 rooms is unique: some may be up, say, 30 outside steps. Others, like suite 169 open off corridors formed of frosted glass –  see the video below, showing the suite, its real-log fire and its charming private courtyard, with a hot tub that is both deep enough and hot enough to be a big asset. 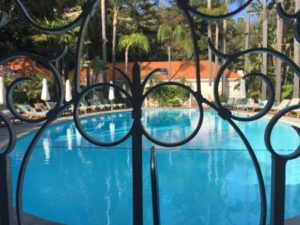 You go in through 169’s door to another world. The suite is designed, like the whole hotel, which can also justifiably be called an urban resort, by Alexandra Champalimaud, whose talents also include The Pierre in New York, and The Gainsborough at Bath Spa, in England. Dare to leave your Bel-Air home, whichever room, suite or villa you are in, and you are in paradise, a garden of twisting narrow paths winding around and flanked by immaculate bushes, trees with intertwined trunks, and what seems like acres of sweetest-smelling jasmine. Nature and humans mingle the whole time, here at Bel-Air. Even as you arrive, taking a 20-foot wide bridge from the carpark, you look down at a curvilinear lake with stately swans swimming. 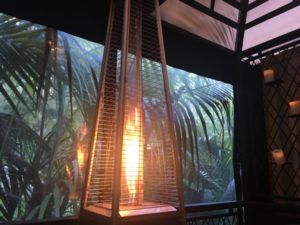 Head for the spa, or the 24/7 Technogym, and you literally walk through the open courtyard of the restaurant, by Wolfgang Puck – on your way, you pass the famous oval pool, beloved of so many big names from the past (the last photographs of Marilyn Monroe, who was living at the time in what is now the two-floor spa-gym block, were taken pool-side). I met a friend for a pre-dinner drink in the indoor bar, its walls lined with black and white photos of stars of the just-not-silent screen. Dinner was at one of the restaurant’s more-outdoor tables, but there were plenty of Bordeaux burners for warmth: Puck’s garden salad includes what he calls ‘blooming flowers’, and artichokes, and my main course that night was a giant veal chop, from the Pennsylvania farm started by Wayne Marcho back in 1969, with caramelized garlic, and lutein-rich Bloomsdale spinach, that apparently helps eye health. 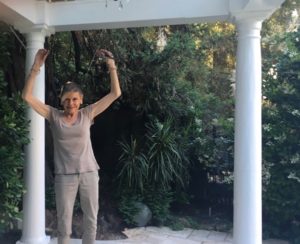 Wolfgang Puck is doing, which means taking rather than teaching, a business management course at Harvard. He has, of course, already learned so much during his decades of devising and managing restaurants, and I find it interesting that here he goes American at dinner and French at breakfast. Let me explain. Butter is Echiré, and preserves are Alain Milliat, china is Bernardaud, cutlery is Christofle and salt and pepper mills are, as you have already guessed, Peugeot. One special dish listed is his French-style omelette, which comes filled with wild mushrooms – and Gruyère, which of course is Swiss. I left this luxury hotel via a pause for a photograph in its wedding pagoda (GM Denise Flanders, who started out as a psychlogist, says they do about 40 weddings a year) but the swans stayed awake. Last memories will also include, by the way, help-yourself wakeup coffee in the lobby lounge, with its 360-degree electronic fire pit, and the sensational stationery, printed in day-glo metallic blue. NOW SEE A VIDEO OF SUITE 169