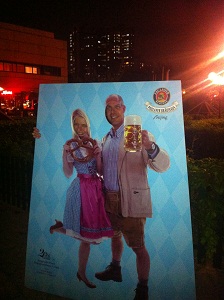 Axel Bethke, right cutout, gets into the mood, ready for a Paulaner party

Twenty years old and forever young, that is the story of the Paulaner Microbrewery at Kempinski Hotel Beijing Lufthansa Center, says the gal (she loves this place). The restaurant opened July 12th, 1992 – and two and a half months later, on October 9th, 1992, to be precise, a 540-bedroom hotel and masses of offices opened in its wake.

Today it, the microbrewery, continues to be packed out, night after night.  With over 400 seats, inside and also flowing on to the terrace outside, it serves over a thousand, 40 percent of whom are regulars: the top echelon, the 260 members of the Paulaner Club, have their own personalised ceramic tankards, the rest of the happy patrons have to make do with glass.  About five percent of the total are non-Chinese. 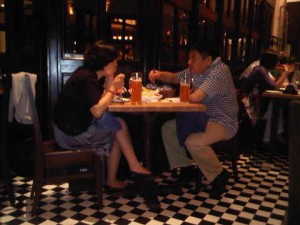 The locals love it.  They like the atmosphere, the food and its sharing capabilities – and the beer.  Brewer Norbert, from Paulaner, brews over 20,000 litres of beer every month, both light and dark brew. It takes four weeks from time of fermentation to consumption. 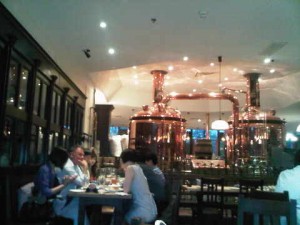 The fermentation vats, in the distance, are cleaned daily

The marvellous copper vats, the main feature of the restaurant’s decoration, have to be polished every day, just as they have always been in the illustrious brewery’s past, in its Munich home. The history of  Paulaner, now owned by Heineken and the Schörghuber family, goes back to 1634 when the monks at St Paola monastery brewed beer for their own use.

Dining in a German beer house also provides the perfect opportunity to learn about German wine.  The label must show the name of the grape and the vintage and the intensity of sweetness, plus alcohol content.  We drank a 2009 St Ferdinand Dornfelder Trocken Qualitatswein Pfalz 13% in oak.  Right, let us interpret this.

The wine is from St Ferdinand vineyard in the Pfalz area, formerly Rheinpfalz.  It was made in 2009 using the Dornfelder grape that turns out to be a modern invention. In 1955 August Herold crossed a Helfensteiner (itself a cross of the Frühburgunder and Trollinger grapes) and a Heroldrebe (itself a cross of the Lemberger and Portugieser grapes). The resulting cross he called after the founder of the Weinsberg Wine School, Imanuel Dornfeld.  It is any wonder the non-German winelover is confused? 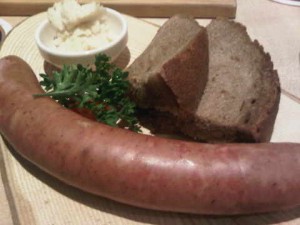 A home-made Paulaner’s Krainer sausage, with horseradish and brown bread, comes on a wood platter

The majority come for the sausage platter, a giant serving dish of assorted sausages and sauerkraut (Chinese have traditionally eaten a lot of cabbage, anyway).  The single diner, with a less-hearty appetite, may choose a Paulaner’s Krainer sausage.

This is a six-inch beauty, in real pig casing, served on a wooden platter with spicy horseradish and slices of dark brown German bread – it also goes well, by the way, with French fries. The Paulaner has a German butcher, who makes the sausages daily. 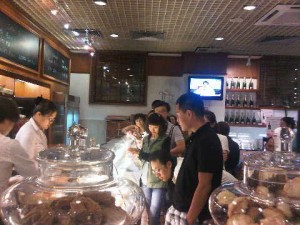 At nine pm precisely, all fresh items in the adjacent deli are half price

Local reputation says everything at Kempinski Hotel Beijing Lufthansa Center is fresh. The locals know that at nine every evening all the highly desirable items in the delicatessen next to the brewery are sold off at half price. Finish your beer and the last of the sausages, walk 50 yards to the deli and, if it is just after 2100, join the line to pick up croissants and cupcakes to take home. 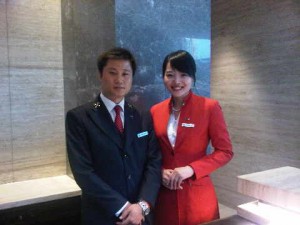 Back in the hotel lobby, a signature Lady In Red stands next to a concierge

Leaving the hotel by the main door, one passes one of the Kempinski-signature Ladies In Red, charming and knowledgeable hostesses who liaise with concierges and doormen and generally anyone around.  I have been talking to another up-to-the-minute Chinese lady, Catherine Zhang, tonight wearing green.

She says there is a growing trend among successful Chinese women in the 30-40 age group for moving into hotels for a night, alone or with girl friends (even the married ones do this, saying their husbands are perfectly happy to see them go for a short time). They call them staycations.

They book the hotel online or by telephone and they want pampering. L’Occitane is their favourite toiletry brand. They use the minibar – they want Chivas Regal – and they like foot massages, and Sunday brunch.  They also appreciate CNN and other foreign television channels they do not get at home.