Computer vision of how Baku's Flame Towers will look

Soon, Azerbaijan will be able to compete with perhaps better-known countries. The gal thinks of Australia’s Sydney Opera House, Brazil’s Christ the Redeemer – Cristo Redentor, England’s Big Ben or Tower Bridge, France’s Eiffel Tower and the Statue of Liberty for the USA.  Perhaps one could also now add Sheldon Adelson’s E-shaped Marina Bay Sands for Singapore.  Each one of these iconic shapes conjures up not only a city but a nation, or at least a city-state.  So Azerbaijan will, as of mid-2012, be able to show off its own icon, the $350-million three Flame Towers, literally towering over Baku.

destinations is already illustrated by the amount the Aliyev government is spending on cleaning up the Beaux-Arts buildings in the Old City.  They have spent oodles on a cultural centre, like an enormous flying whale, designed by top architect Zaha Hadid (we know she likes odd shapes – see her Z-shaped steel chair in the sensational boutique at Royal Monceau Raffles, Paris, part of the growing FRHI hotel empire).  As it happens, another FRHI hotel, Fairmont Baku, will open this August in one of the three Flame Towers.  The 318 rooms will all have stunning views, down the hill and either across the Old City or down to the Baku Boulevard and far out across the Caspian Sea – I especially loved corner rooms in the 01 or 03 series, depending on the floor.  Rooms go up to the 28th floor of one of the towers: 57 of them are Fairmont Gold, with access to the sensationally futuristic two-floor-high Fairmont Gold Lounge, accessed on the 19th floor.  Smallest room is 500 sq ft, rising to the 4,000 sq ft of the Royal Suite (some suites have ceiling-fed Kohler infinity bathtubs).  Instead of Fairmont’s customary Willow Stream spa, here is an 16-room ESPA, determined by the choice of the owner Hassan Gozal of Daax Corporation.  And yes, of course he wanted his hotel open in time for Eurovision, May 22-26, 2012, and, says hotel GM Adrian Ellis, not long arrived from Corinthia Royal Budapest, somehow there will be 60 rooms open in time but the main hotel opening is probably going to be August.  He already has his food guys in final stages of preparation, namely a modern-look French brasserie (fortunately his chef, hot from Muscat, is Jean-Luc Aman), and a steakhouse.

The complex includes the first IMAX theatre in the region, and about 70 stores – oh dear, with all this retail, how are they all going to manage? Ellis hopes that an On Your Marks (Marks & Spencer) might be among the labels. Undoubtedly every visitor to town will come and gawp at the Flame Towers.  Masterplanned by a Brit, Ben Hughes, they have been designed by the St Louis MO-based HOK architects, founded in 1955 by three alumni of the School of Architecture at Washington University in that city, George Hellmuth, Gyo Obata and George Kassabaum.  They are now the largest architecture-engineering firm in the USA, and other current projects include the Dali Museum in St Petersburg FL and Porsche’s US headquarters in Atlanta GA.  For Hassan Gozal, HOK has come up with three undulating towers reflecting the fire that is symbol of Azerbaijan and its multitude of oil wells.  The blue-glass buildings soar to 620 feet, offering 32 interior floors.  As well as hotel, there will be residences and offices.  Again the question poses itself, who-all will live there, who will work there? At least they will offer a beautiful sight to the whole of surrounding Baku. The exteriors, apparently, can be used as giant screens, to change colour or even show movies.  A similar effect is available at the world’s tallest hotel, the super-luxury SHKP-owned Ritz-Carlton Hong Kong.  There, its 118th floor (sic) indoor swimming pool can have, thanks to a Step Control Timer Panel working with LED Studio Computer’s software, turn the entire end wall and ceiling into one giant LED screen.

So the Flame Towers will ‘ignite’ yet more interest in Baku, as will the style-personified Four Seasons Hotel Baku.  Although some of the city’s new-look will not be ready for Eurovision 2012, the $50-million Crystal Hall Eurovision Center is at finishing stages. Delegates from the 42 participating countries (can YOU count so many countries in ‘Europe’), and participants and hangers-on and fans will be driven from Baku’s Heydar Aliyev International Airport along wide roads lined with ten-foot walls being hastily erected to hide visual ‘eye-sores’ – these will come down later, the girl is assured.  She would also like to say that the airport, manned by the Silk Way transport-travel conglomerate, works splendidly and she was extremely impressed with AZAL Azerbaijan Airlines’ service, especially the individual tablet entertainment systems they hand out in Business Class. 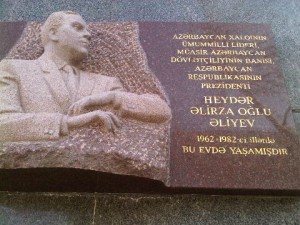 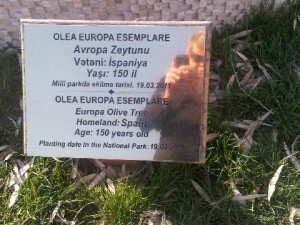 Heydar Aliyev, father of the current President of Azerbaijan, Ilham Aliyev, is commemorated throughout Baku.  Every hotel seems to have a photo of him in the lobby (one thinks of Marriotts worldwide, with their standard photos of JW Marriott Jr and his father). There are plaques to father-Aliyev in the Old City.  There are as yet no plaques to his ultra-capable daughter-in-law, Mehriban Pashayeva Aliyeva, whose family Pasha Group owns the Bentley concession (hence the Bentley bar in Four Seasons Hotel Baku, another Pasha possession) and practically every top retail brand imaginable…  The Azeris do love plaques.  Many of the trees imported to decorate the impressive Baku Boulevard, running as it does about three miles along the coast, sport their own plaques. 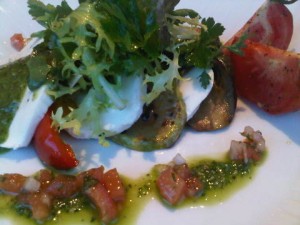 And everywhere the food is sensational, with great local produce (this particular caprese is from Hilton Baku)

Stay long enough and you get a plaque – I have certainly got a total addiction for Baku’s beauty (buildings and people), and so much else, including its great food, from borsch to sushi with a myriad of tasty caprese salads in between.  Next time, who knows, I may even get to visit to visit some of the forthcoming attractions, say the Azerbaijan Carpet Museum, looking like a carpet roll, and see some of the Azeri weaves – and fly away on my own carpet, who knows?