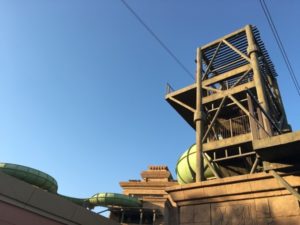 The myriad of activities include ziplining

Atlantis Palm Jumeirah, Dubai is such a city-in-itself that you barely have to leave whichever of the 1,539 rooms you have chosen. The gal left her little suite and patrolled some of the 120 acres, which includes a full mile and a half of white sandy beach. There are dolphins to swim with, and seemingly sky-high water chutes, and a long lazy-water ride. There is a zipline. There is anything you can think of, at this luxury hotel, and not surprisingly at weekends families come, often regularly – overall, the average age of adult guests is getting younger, which means more small children. It is also worth commenting that top market here is from UK (well, who would stay home in often grey-and-wet when here is invariably blue-sky-and-sun, though sometimes too hot to be truly agreeable?). 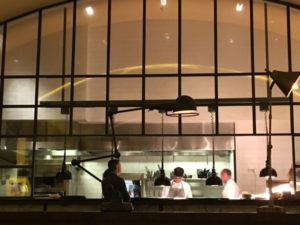 You also come here for the food. There are so many restaurants you do not know where to start. This time, it was dinner at Gordon Ramsay’s Bread Street Kitchen (BSK), a new sibling to the highly popular BSK at Marina Bay Sands in Singapore, and sure enough this BSK has also successfully tickled diners’ fancies. Before, French culinary great Michel Rostang had run a bistro here for five years, but the new concept is really working. The number of people lunching and dining in this space is 40% higher than before, and there is also the attraction of Gordon Ramsay himself. He is a celebrity, says the German culinary maestro overseeing all Atlantis food, Sascha Triemer. When Gordon Ramsay is in town, and in the restaurant, there are constant requests for selfies. 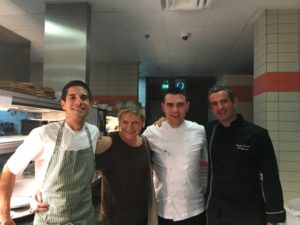 Some of the team

I saw the celebrity-effect in Istanbul a week ago. That was induced by sheer Instagram numbers. Gordon Ramsay has achieved his fame thanks to TV shows, Hello! and tabloid stories but also by the fact that he does produce the food that luxury travellers today do like to eat. Last time he attempted Dubai it was more gourmet. Now it is comfort. I had not had his fish and chips before and, especially with a glass of Marc Kent’s 2013 Boekenhoutskloof The Chocolate Block, they were superb, with lightest fish, irresistible three-fried chips, and bowls of pea purée (his version of the traditional mushy peas) and thick brown sauce, probably what Grandmother Ramsay always put on a dining table, though in a bottle. 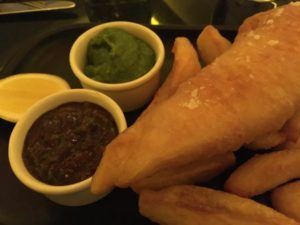 The design of BSK, by Jeffrey Beers, is just perfect: it oozes space, and it is delightfully casual (reminds me a bit of the Oyster Bar at Grand Central, New York). It always makes a difference when the ultimate boss of a mega-resort or luxury hotel like this is a food man, and no-one fits this label better than the proud Basque Serge Zaalof (photo at top, in one of the tea lounges). He knows his food, and he also knows what luxury travellers of any age also want. The gym, by the way, is outstanding: it is a big circle, though I do not know what happens in its centre – see the video, below, for more details.