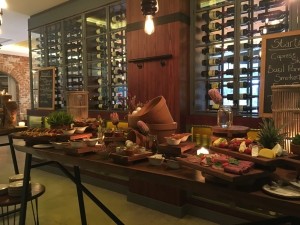 Among the best-loved international South Africans is golfer Ernie Els, above, who actually lists as his main residence the Wentworth estate, west of London (this is the golfing estate now controversially owned by the Chinese Thai who also owns the forthcoming Four Seasons London Ten Trinity Square, plus Fairmont Beijing and the Red Bull concession for China). But unlike that high-spender, who had the first BBJ in China, Ernie Els, known as Big Easy, thinks of others. He has a foundation to fund research into autism, he shares his wines with others, and his design and dining styles. Hence, says the gal, the luxury central-city Hilton Durban has a brand-new-and-booming Big Easy restaurant. 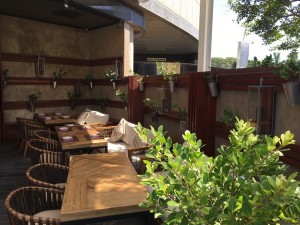 Seating is inside – or out

Opened just over two months ago, the 145-seat restaurant is indoor-out. Choose high-up communal tables, a private dining room that accommodates up to 20 for wine dinners, casual bar-lounge counter seating, a main room with ten wagon-wheel chandeliers overhead, or outside terrace loungers under shady umbrellas. Inside is grey-painted concrete flooring, solid wood tables with wood and leather chairs, or banquettes, and some walls are all distressed bricks: others are photo displays of Big Easy‘s course highlights, or PGA tournaments. The look is masterminded by Ernie Els‘ own designer, who has done his winery in Stellenbosch. The food is under the charge of a charming Cape Town chef, Janine Fourie. The result of all this is that the restaurant is beating forecasts by 30%. 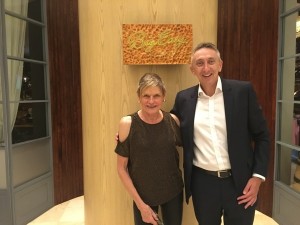 So we sat down – I was with my new friend Markus Fritz, the Austrian who runs this 327-room hotel (he arrived in 2013 just at the start of what will have been a four-year total new look by the time it is finished, March 2017). The menu is on an A3-sized leather-backed sheet, and has Ernie‘s own favourites, which we had to try. First came tid-bits including Mr Fritz’s beloved oxtail and marrow lollipop-shaped fritters. Then I went on to an 800-gram tomahawk on the bone, divine, on a big wood platter, with thick-cut Big Easy fries, and I did not need the ultra-sharp steak knife. The finale was a plate of South African desserts, namely milktart, hertzoggies (meringue-toped jam tart), koeksister(deep-fried twists), and malva pudding (apricot sponge). 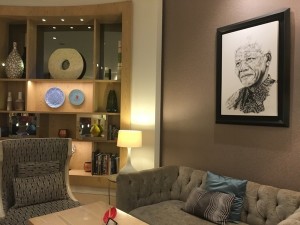 One corner of the lobby has a sketch of Nelson Mandela

Of course we drank Ernie Els Big Easy 2014, by winemaker Louis Strydom. This is a powerful red, with 61% Shiraz, 20% Cabernet Sauvignon, 7% Grenache, 4% of both Cinsaut and Mourvèdre, and, much to my surprise, also 4% of white (Viognier). Of course, being South Africa, we also had bread, a round of cornbread which came in its own skillet, and lots of veggies – spinach, in my case. Of course I felt full, but I did a double-dose of work-out this morning, to make up (the gym, fortunately, is not only 24/7 but its Technogym machines all have sudoku in the system). And as I left, I thought again, as I had continually throughout my stay, this is really a very agreeable hotel and being right next to Africa’s most important convention centre, and within minutes of the beach, adds to the overall luxury.