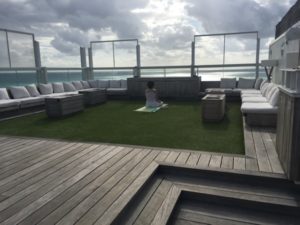 The gal needed all the energy she could get while experiencing the new-look luxury that is 1 Hotel South Beach (and that gorgeous Cacao Green smoothie, as thick as avocado icecream, worked wonders). This is a 426-room hotel that offers four big swimming pools, and direct access to Miami Beach’s Atlantic Way biking, running and walking track, and to the vast beach and Atlantic Ocean. Yes, think wellness, here.  Back in UK, Carole Bamford now has one of her Bamford spas onboard Belmond’s Royal Scotsman train, north of the border in Scotland.  Last December, as well as opening the first Bamford Spa in the USA, the 1 Hotel South Beach also launched a massive Spartan Spa, as big as any LA Fitness facility anywhere (look at the military alignment of hanging ropes, above). There are rooftop yoga spaces, and rent-a-bike racks just outside the property. 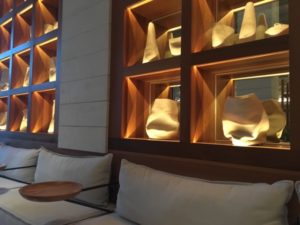 Yes, I felt good, and healthy, all my stay here. I was ready for entertainment, but sadly I missed a jazz concert by Elew, the hyperkinetic pianist who played at ILTM in Cannes a few years ago. I was entertained, instead, by dining. You enter BeachCraft by Tom Colicchio past a wall of real woven baskets. Inside, the space seats at least 200. At dinner, over a glass of Bergström 2014 Cumberland Reserve Pinot Noir Willamette Valley, I admired the menu’s listed suppliers, including Zak the Baker, and went for yellowfin tuna tartare followed by grilled black grouper (no room, then, for chocolate croissant bread pudding!). At breakfast, still on Bernardaud, with Peugeot salts and peppers, the buffet is just amazing – see the video, below. 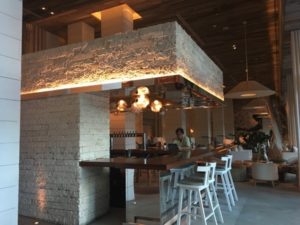 Some prefer something more casual, and the lobby’s bar, and low seating, become places of choice all day, and evening, long. This is not just a hotel, it is part of Mother Earth, says GM Shadi Omeish, a one time archaeologist in his native Jordan who went on to be a tour guide, and then finally a hotelier, via sales. 1 Hotel South Beach allows you to connect, with the beach outside, with real food, and with lovely warm employees (we want everyone to leave feeling they are happy with their investment in time here, says Shadi Omeish). As I got into the hotel’s Tesla town car, to leave, I was even happier, and a lot more energised, than when I arrived, and that, in today’s frenetic world, is true luxury.  NOW SEE THE BREAKFAST BUFFET VIDEO, BELOW