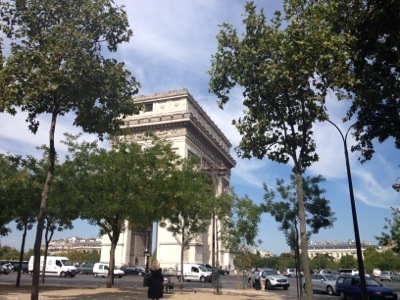 Napoleon wanted to make the capital of his empire the most impressive in the world. In 1806 he authorised what is now the Place Vendôme column – next to one of the city’s currently-under-refurbishment luxury hotels, Ritz Paris – and that same year he agreed that architect Jean-François-Thérèse Chalgrin, with the help of Jean-Arnaud Raymond, should design an amazing triumphal arch, ‘at the entry to the boulevard by the site of the former Bastille’. The first stone was laid, the gal learns, on Napoleon‘s birthday, August 15th that same year. (The French worked more quickly in those days, pre-EU and other bureaucracy.) 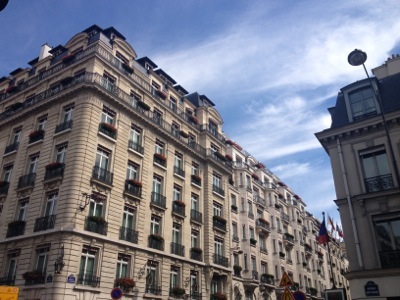 It is gorgeous being back in Paris when the sun shines. I walked and walked. Coming east along rue du Faubourg I got to an area of chic art galleries. There, almost looking directly across at the Elysée Palace, or back side thereof, is Hotel Le Bristol, Paris, a mansion built for Madame de Pompadour, Jeanne-Antoinette Poisson, 1721-1764, mistress of Louis XV – in 1824 it was extended to take in the former convent of Les Petites Soeurs de la Bonne Espérance, and in 1925 it was turned into a hotel by Hippolyte Jammet, who named it for Frederick Augustus Hervey, 4th Earl of Bristol, 1730–1803 – he was known as The Earl-Bishop, as after being Bishop of Cloyne for merely a year he was Bishop of Derry from 1768 until his death. He had time for lots of travel (he was known to walk around Rome wearing a broad-brimmed white hat, many chains and red breeches, possibly an attempt to upstage his Catholic rivals). He also had time to get married and beget seven children. 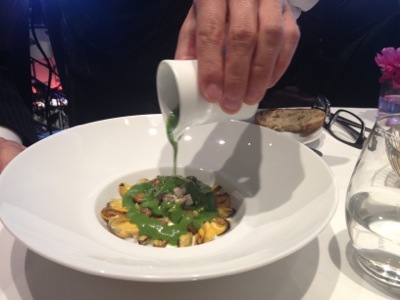 Soup is elegantly poured on its base

Today the 188-room hotel is a jewel of the Oetker Collection, and, oh so typically Paris, it has not one but two Michelin-starred restaurants. The face of Bulgari was lunching in Epicure, which has three stars – in summer, you eat in a light and airy glass-walled conservatory looking out at manicured hedges, giant magnolias and an ancient stone fountain. The face of Girlahead, by contrast, was lunching in the lovely 114 Faubourg (one star), looking out at art collectors walking to galleries in rue Matignon and looking around, in the completely full restaurant, at French literati and European personalities, and orange wallpaper with gigantic, like three-foot-high, dahlias. This is a place where work gets done. Each table has an elegant notepad and tiny, beautifully sharpened pencil (and I am sure they had eyeglasses if needed) 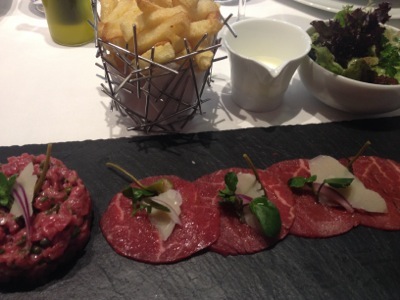 GM Didier Le Calvez, who also heads Oetker’s operations in the Caribbean and the Seychelles, and marketing worldwide, says the typical guests at this particular luxury hotel are mostly mid-40s up, with a growing percentage of youngsters who want to discover what real luxury is. The answer? Real luxury has soul. It also includes tradition, sometimes with a modern twist – like the presentation of my steak tartare.