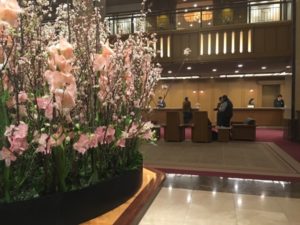 Many major world cities have historic hotels – think the Plaza in New York, the Dorchester or the Savoy in London, the Ritz hotels in Lisbon, Madrid or Paris and, of course, Raffles Singapore. Tokyo’s iconic luxury hotel is The Imperial. It was originally built in 1890 for the government to entertain foreigners, and it was re-imagined in the period 1916-1923 by Frank Lloyd Wright (whose 150th birthday it is celebrating this year). Today the imposing lobby of what is now a 931-room hotel is liberally dotted with businessmen in dark suits and ties. Apart from those in kimonos, women are also sombrely dressed, as always. Flowers lighten the scene, says the gal. 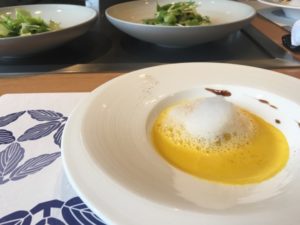 I was invited to lunch with the hotel’s MD and Deputy GM Yukio Kanao – no, I do not understand Japanese companies’ senior pecking orders, either. The hotel’s #1 GM, Hideya Sadayasu, is also President, and his immediate boss appears to be Tetsuya (Ted) Kobayashi, who gave up political science to join the hotel as a janitor. All these three gentlemen, by the way, are absolutely charming as well as being innate professionals. So there I was, with Kanao-san and his PR minder, seated at Kamon, on the 17th floor of the hotel. We were at a teppanyaki counter, in the hands of the master spatula-artist shown above. 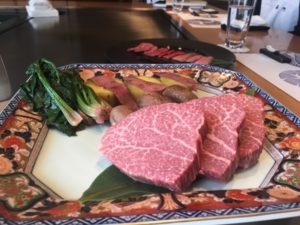 We had linen napkins, held with silver chains, tied round our necks, and first, while we discussed affairs of state and, more importantly, of the hotel, pumpkin soup, its rim intentionally sprinkled with designer salts, appeared as if by magic. And then, wielding a pristine spatula, the master chef started work. First he showed the ingredients, which included tenderloin from Hokkaido. He was really rather liberal with the seasonings, and used the side of the spatula as a knife to chop mushrooms into bite-sizes and to make a slit in each of the rounds of sweet potato (lengths of skin went into those slits). The dishes were ready, and gosh the combination did taste good. 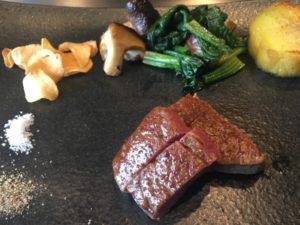 Kanao-san says there are 1,800 working at this luxury hotel, the high number needed because of dining, wining and events. As well as 17 restaurants, there are big banquet occasions, all adding up to the fact that 60% of total revenue is not from beds. We talked a bit about the owner of it all, the massive property group Mitsui Fudosan, who also own the lovely Amanemu in Shima, where I had been less than a week ago, and, in Hawaii, Halekulani, which I will be returning to in December. Kanao-san also spoke about two sister hotels that provide a perfect three-stop circuit for luxury travellers. Start here, be driven two hours to the Alpine-style mountain resort Kamikochi Imperial, open summer only, and then on to Imperial Hotel Osaka, right next to the historic castle. This sounds just perfect for culture and nature-loving travellers.