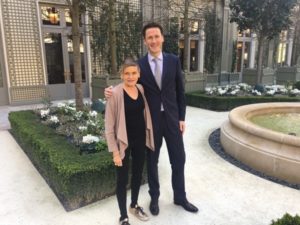 It was a blazing hot spring day in Paris and the tallest hotelier in Paris, if not France, wanted to show off his garden. Ritz Paris, in the centre of the City of Light, stretches from its main entrance, to the northwest corner of Place Concorde, west to Rue Cambon: the five-floor hotel, formed of five buildings of different ages, is like a long drawn out C, its arms wrapping around the garden. It is a typical French garden, said that hotelier, Christian Boyens, who has been GM here since 2011 – this means it is all green and white, with no other colour. We looked along to the trompe l’oeil cover of the Rue Cambon end of the building (it was erected after a fire, on February 19th, 2016, stopped that part of the 142-room hotel re-opening along with the rest of the building, on June 13th, 2016. 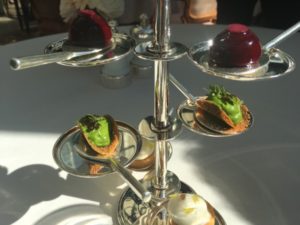 Within eight months the hotel has picked up two Michelin stars for its main L’Espadon restaurant, and a first-ever one-star for the more-relaxed adjacent Jardin de l’Espadon. This is in the conservatory, its ironwork painted in the soft teal that is a feature of many important Paris building: its hemispherical roof, which can, thanks to Alsatian workmanship, be automatically opened or closed within two minutes, apparently is quite a challenge for window cleaners. In summer the Jardin becomes even more informal but, still in its winter gear, it has oriental rugs, and quite substantial seating, and palest pink linen cloths are set with gold-shaft, silver-topped Peugeot salts and peppers and Haviland Limoges recreating the patterns used at the hotel’s original opening, in 1898. 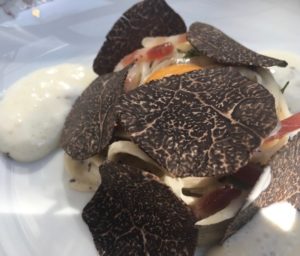 Chef Nicolas Sale moved here from Kilimanjaro and K2, both at Courchevel 1850, in January 2015. I loved his lunch menu (even the actual print-out is a delight, a two-fold A-4, its cover the same Paris teal). We started with tiniest-cherry-sized balls, one small bite of beetroot in a jelly – each morsel sat on a silver spoon on a silver tree, which also held two other amuses but I was talking too hard, sorry chef. Surprisingly, the country bread chunks, no choice, were the size of brickettes for a wood-burning stove: both salted and unsalted Beillevaire butters sat under silver cloches. And then came my starter, salsify tagliatelle, pasta-style with truffle, and that was followed by a portion of sautéed John Dory on top of an artichoke barigoule (the chef had, at my request, held the curry that should have gone with a decorative mussel). 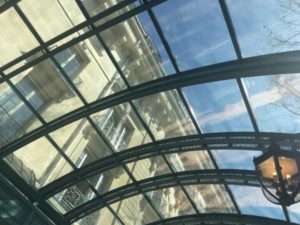 Christian Boyens leaped at the chance of moving here from Los Angeles, where he had been number two at Peninsula Beverly Hills, initially under one of his mentors, Ali Kasikci. Apart from anything else, he admits, Paris is nearer his parents, back in Hamburg, plus who would not be excited at the thought of running what is one of the ten most iconic hotels in the world? He is picking up awards, Michelin and Forbes Five Star, and he has a superb team of 600 which includes legendary barman Colin Field and the hotel’s first female head sommelier, Estelle Touzet (who said her two wines to take to heaven would be a German Riesling, and a Cheval Blanc). What now, to take this luxury hotel even further up the elegance ladder? Christian Boyens says the next focus is fine dining. Even the best still has room for improvement.