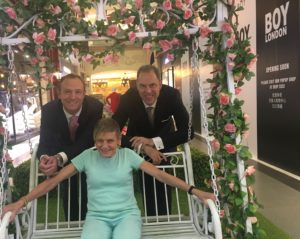 Every young person deserves a swing before a meal, and on the way to lunch in The Parisian Macao – one of the most beautiful Cotai luxury hotels – the arbour-like swing was just too tempting. Savvy owners know that the more touch points they can put into any luxury hotel, the more consumers are likely to remember it, and come back. The gal was lunching at the year-old Brasserie on Level 3 of The Parisian Macao, and even walking to it, along a stylised version of Champs Elysées, puts a spring into your step. 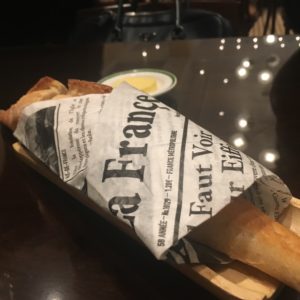 I was with Bede Barry, who looks after 4,754 of the rooms here, at the Venetian, and the franchised Crowne Plaza and Holiday Inn, and we were joined by just-arrived head of Food & Beverage for the whole of Sands Macau, Tom Connolly. He must have one of the biggest catering responsibilities in the entire hotel world. To run 37 restaurants and six bars, and keep an eye on a further 30 leased-out restaurants, he has a staff of 4,200. Every day they get through 500 kg of pork belly, 400 kg barbecued pork, and 280 chicken, and so on. It is mind-boggling. 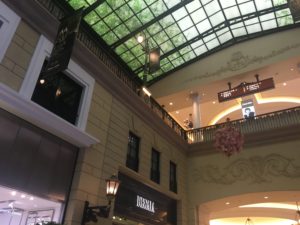 Looking up at the lobby

But, he says, when he was last working in Macau, up to five years ago, China’s gamblers only wanted simple comfort food, such as dumplings and noodles. Now they are becoming increasingly sophisticated, and he is just about to open a French-angled Chines restaurant. Today, at lunch, we first smelled, and then nibbled at, signature mini-baguettes in paper wraps, with slightly-salted Isigny butter on the side. Then, between us, we chose Gillardeau oysters, asparagus salad with poached egg and lardons (as above) and a crêpe parcel that looked like a brown paper envelope. NOW SHARE THE LOBBY’S ENTERTAINMENT

And then we walked along one of the retail avenues that are a feature of all luxury integrated resorts, the name for casino-hotels, to the splendid lobby. We coincided with an impromptu tango and the spectators were actually just as memorable as the dance pairs (see the video below). This provided yet another memory point, in fact, for The Parisian Macao, and I have promised to go for more on my next visit to this unique SAR.