Sitting in the spring sunshine in a tasteful Paris garden is an idyllic venue for lunch, says the gal.  Her host today happens to be Philippe Leboeuf, the sleek GM of Mandarin Oriental Paris (if humans turned into dogs, he would be a champion greyhound).

The Bollinger, favourite of Her Majesty, is poured from a magnum.  He immediately recounts how he met HM several times when he was running Claridge’s.  To Philippe, she has an aura only shared by the Dalai Lama.  Super human.

Look back through the glass-walled lobby to rue Faubourg, with its newly-installed Emporio Armani directly opposite

We are surrounded by Parisian couples who lunch – and, one suspects, do not spend many of the other 22 hours a day together, probably returning to their loving spouses or running the country or whatever.

The menu, from the hotel’s indoor Camélia restaurant, is good on mix-protein-plus-veggies.  It is also commendably admirable on coming up with a veggie-only menu.  While we wait, we talk about this, what I have already described, and I confirm, is arguably the most beautiful hotel of the 21st century.

On my way in, I noticed the temporary art display, six giant Vagabond abstracts, Rothko style if he had run out of anything but black, grey and white paints.  I notice how the lobby alcoves’ corners are held back not only with cord ties but with jeweled knots.

Salad in the sun

Still waiting, but not annoyingly so, I dare to look past my host, through the glass walls of the lobby and through the lobby to Rue Faubourg.  The other side of that there is now an Emporio Armani.  Wow, what a backdrop.  Presumably Giorgio says the same when he is in his store, looking out.  As a backdrop Mandarin Oriental Paris could add $50 to the price of each Armani item…

My salad arrives, perfection, the olive oil on the side.  It comes on a white plastic tray cleverly printed with a leaf pattern, a reminder we are in a green garden. We talk about his recent holiday, to all-white Lappland, far into the Arctic Circle. The problem is he and his group kept on stepping from Sweden to Finland, one hour ahead timewise, but then what time was it?

Monaco’s Prince Albert and his South African swimmer Princess, Charlene Wittstock, were travelling around too.  Did they also, like Philippe, find the terribly-named, terrific-experience Lappland Incentive guesthouse, a family home where everything is for sale, and nothing, it seems, is too much trouble?

Sounds just like this luxury hotel.  It feels like home, thanks to Sybille de Margerie’s interiors and the people who run the place, for whom nothing is too much trouble (the concierge had already given me detailed instructions of whither I was wandering next, even though he did not know me from Adam, or rather Eve).

My main course arrives, in the form of a plate of vegetables, pretty as a picture, a display of blobs of veggies and small flowers on a big white plate.  The side order of fries, in a full-colour ‘newspaper’ from the hotel, held in a white cone, should be compulsory Last Supper food.  Each chip was moist and real inside, held in a light crisp coating – why does one think of La Perla silk underwear in a vintage Louis Vuitton travel trunk?

Pepita Diamand, left, with one of the leaf-look serving trays

But the highlight of the meal is yet to come.  Pepita Diamand just happens to swing by, after swimming.  She is a friend of M Leboeuf, a techie wizard, and a fashion insider.  Last time we met she was blogging Paris.  Now she is taking over the world of fashion, and you can already link through to her site.

She too is so appalled by recent fashion shows – travesties of style – that she even took a fashion course last summer (if Victoria Beckham, whom we both admire, can ‘do’ it, why not Pepita-from-Toronto?).  She needs to go off on an errand. I need to go shopping, and then check what is new on WorldGuide.  Presumably Philippe Leboeuf needs to go and run the 21st century’s most beautiful hotel… 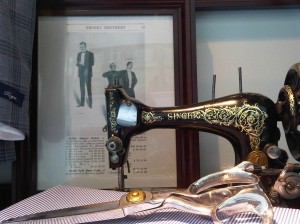 Exiting to Avenue Faubourg, the attention is diverted.  Pascal Morabito, whose gold champagne cork tops for Amour De Deutz 1999 have become essential for placomusophiles, collectors of champagne corks, has a store one block west of the hotel (I was introduced to Morabito at Maia, that lovely Leading Hotel in the Seychelles).

Chloé is about to open immediately next door.  Brooks Brothers, founded in 1818 and still going strong, is immediately next to Emporio Armani, opposite.  I feel like part of history, design, today and tomorrow, quality all the way.