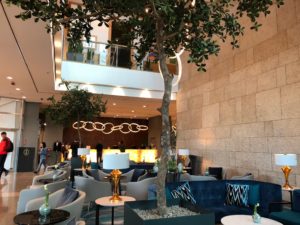 InterContinental Warszawa has a chunk missing out of one corner, as the image above shows.  Apparently at early planning stage neighbours complained that the 44-floor building, originally with four vertical facets, would cut off the sun, so the design changed shape, which certainly makes this 414-room luxury hotel distinctive, both outside and in.  Today, its five-floor open lobby, recently re-designed by Alan McVitty, has metre-wide crystal hoops, Olympic-style, eight hanging horizontally over front desk and twelve, hung vertically, in the stairwell. The lobby is also memorable, says the gal, for its tailor shop, a working branch of House of Tudor, and for its equally popular, dull red-hued Café Wedel, open from 8 a.m. 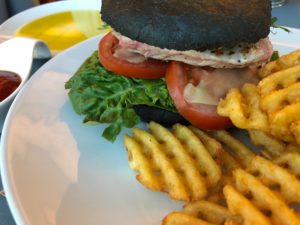 Thirty wood stairs, or an elevator ride, up from the Café brings me to eatertainment floor.  The more-casual Downtown has all-wall windows looking across to the 1952-vintage Palace of Culture, oh-so-Soviet and known as the Eighth Sister, a reference to Moscow’s seven matching stone ‘wedding cakes’ (this one is Poland’s tallest building, and focal point of the city). A much-publicized new burger promotion encouraged me to try the tuna burger, with squid-ink bun and liberal interior spread of guacamole, and yes, it was good.  Downtown’s breakfast buffet, by the way, is justly famous – see a video below, although sadly I arrived before the 7 a.m. start of the harpist. 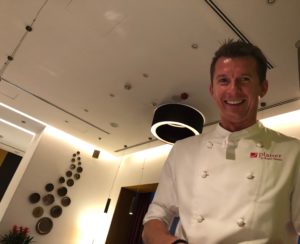 Pride of place when it comes to dining here goes to Platter, whose enthusiastic – and talented – chef Karol Okrasa must singlehandedly be putting Polish cuisine on the world map.  He fires nonstop salvos of appreciation for this vegetable, this piece of meat (he is an eggs and meat man, although that night he was only going to have cornflakes for his own dinner as he is practising for Warsaw’s next marathon, April 26th, 2018, but then he has done so many marathons, both horizontal and vertical, all the way to the top of this hotel).  It was difficult to divert him from wanting me to have the eight, or at least the six, course tasting menus that most in the busy restaurant choose, but I managed. 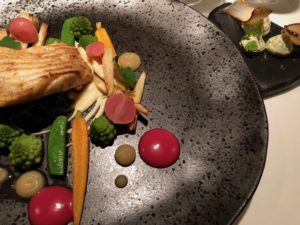 After small black slates holding bread chunks and charcoal butter, and then tuna amuse, I started with the menu’s smoked beef tartare with mushroom crust, marinated boletus mousse, and saffron chutney. An entr’acte of a single small scoop of butter icecream with lemon and mint was totally delectable, as was  fish of the day, turbot which was diverted from spicy-Asian to simple vegetables and tarragon butter. The vodka that night was Ostoya rye, though I detected the sommelier wanted to go straight to wine – next visit, by the way, I shall try a Polish red, Regent Reserva 2013 Winnica Palac Mierzecin, made at the vineyards that are part of that 83-room hotel’s estate near Drezdenko. All this meant that following an excellent night’s sleep in a corner, Club, suite, I was up on the 43rd floor for the opening of the wellness, which of course has outstanding views (there is a big lap pool up there, too). And then, as I left this really comfortable luxury hotel, there was GM Martin Schoenrock to see me off, just as had seen me in. NOW FIRST TAKE A WALK NEAR THE PALACE OF CULTURE, NEXT SEE MY SUITE, THEN THE MAIN BREAKFAST BUFFET