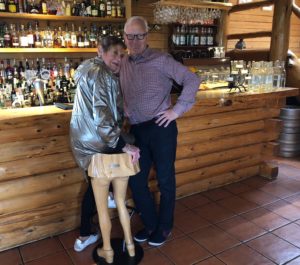 Friôrik Pálsson at the bar

Friôrik Pálsson is quite a character (the gal is using the English art of understatement).  When he bought Hotel Rangá in 2003 he knew nothing about running any hotels, he says, let alone anything that would ultimately run at near 100% occupancy year-round.  But having spent a couple of decades staying, on business, in so-called luxury hotels in England and mainland Europe, places that had bells and whistles and glitter but no service, he knew what he liked.  His motto is try not to say no, and give elements of surprise.  See the two bar stools, above, that he found in Italy. They are now, alongside his real stuffed polar bear, the most posted images on his ultra-busy social media. 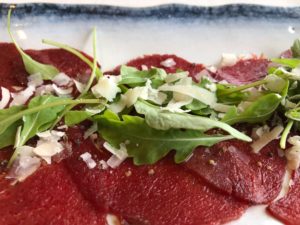 He never reveals names of guests but Justin Bieber posted how much he loved the place, and the Kardashians, paying their own way, described how Kourtney was politely, at midnight, turned out of one of the three thermally-heated outdoor hot-tubs, closing time 11 p.m. Also, Bravo Television booked to shoot a whole episode of Real Housewives of Orange County here, which has brought a flood of reservations from the whole USA, not only Orange County (the US now constitutes 65% of all hotel guests – the 52-room hotel, part of Small Luxury Hotels of the World, runs at full occupancy for ten months, with April and May dipping only to 50%). Summer travellers stay under two nights, winter travellers for about four. 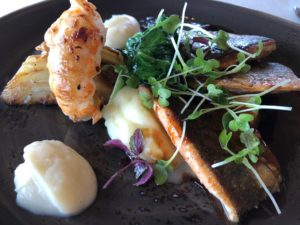 If I were there for four nights I guarantee I would never tire of the food, which is entirely Icelandic and much of it really local.  Head chef Bragi Pór Hanson somehow manages to produce artistic beauties that also taste sensational, working in a windowless kitchen that is barely bigger than the bathroom area of bedroom 60.  My superb driver-guide, Jon Sigurdor Halldorsson, had said not to miss the reindeer carpaccio, the Arctic char, or the lamb, and fortunately having both a lunch and dinner there allowed plenty of tastings.  Lunch is a relatively quiet affair, as some guests have not yet checked in and those already inhouse may well be out on trips, for there is so much to do. 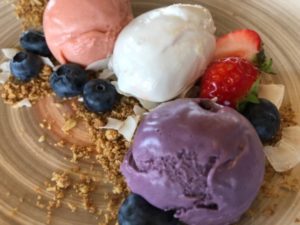 A Middle Eastern family with three kids were out on a day-long helicopter tour – see the video, below of one of three choppers taking off right behind the hotel.  A Back Roads cycling tour, with three back up vans and at least 12 cyclists, was about to check in.  Life at this unforgettable hotel was quiet, but only temporarily.  By early evening, those in a full house seemed to come alive, and the noise was supplemented by locals (well, from at least ten miles away) and by people staying in the nearest towns who had found out that the best food in this part of Iceland is here, at Hotel Rangá. They did 123 covers at dinner, my night, and I am sure many other first-timers had, like me, revelled in the home-made breads, and a beautifully served meal that ended with home-made icecreams, of course with a shot of Reykjavik Distillery 64 Blueberry liqueur. NOW SEE THE VIDEO OF ONE OF THE HELICOPTERS AT HOTEL RANGA