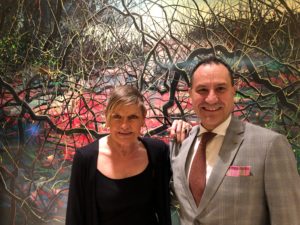 Jing’An Shangri-La West Shanghai has become an extremely successful hotel. The fashion crowd loves it (the building is handy for many national headquarters of top global luxury brands), and the art crowd does, too. Another plus is that this is a 508-room hotel that, thanks to architects KPF and designers HBA, it is more than usually customer-friendly.  The gal looks first at the art – here is GM Marc Vazzoler standing in front of a 280x420cm painting in the main lobby: it is by Zeng Fanzhi, from Wuhan (he is represented by Hauser & Wirth, and at Sotheby’s Hong Kong in October 2013 his Last Supper set a new record for contemporary Asian art when it realised US$23.3 million). 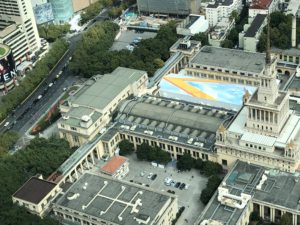 Look down, at the Exhibition Center

This hotel has so much. It has history: next door is the small house in which Mao lived for three months in 1920. It has great views, including over the adjacent Exhibition Center, currently sporting a temporary fabric roof. And it has great food.  We dined in 1515 West Chophouse & Bar, and after amuses of chocolate-covered foie gras lollipops and then a single shell holding a baked oyster with caviar, served atop real pebbles in a small square box, I started the meal proper, with chef William Mahi’s lemon-cured salmon gravadlax, shown above – somewhere in the presentation, in such pointillism style, are salmon roe, orange, shallots, ginger, whipped cream, capers, pickles, lemon confit, and Parisian sauce. And then it was time for some of the hotel’s bespoke beef from Stanbroke Range in Queensland, with Laguiole knives: thoughtfully, all steaks come in two sizes.  Sommelier King Wang, who was national champion in 2017, chose a 2012 Gevrey-Chambertin Vieilles Vignes Geantet-Pasiot followed by a Chinese dessert wine, 2015 Semi-sweet Chardonnay Dme Fontaine Sable Cuvée No 61, Hela Mountain, Ningxia . 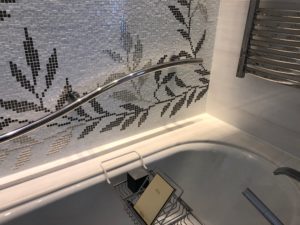 The bathtub’s grab rail looks like an art work

I heard about Shangri-La’s third Ride For Hope cycling challenge, shortly coming to its clients. 30 Shangri-La hotels in 25 cities organised a total of 5,000 circuits covering four different routes, from 730 km total (Sanya-Haikou-Sanya) up to Xiamen-Shanghai, at 1,500 km. The Jing’An cyclists rode with those from Shangri-La Pudong and Shanghai’s Kerry hotel, and for one stage they were joined by Shangri-La President/CEO Oliver Bonke.  And then I heard about 1515’s bar hosting celebrity mixologists.  Grace Tsai, a Taiwanese sponsored by Tito’s Handmade Vodka, had been here October 31st to November 1st, showing the skills that won her top prize in Bacardi Legacy Global Cocktail Competition 2017. And after all this, when I returned to my really comfortable suite, #5632, I thought that if I could I would give a prize to the designer of many of its fittings, all so thoughtful – see the bath’s grab rail, which not only serves a purpose but looks, well, just beautiful. 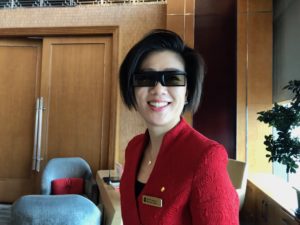 The 55th floor Horizon Club is, by the way, another reason the arts-and-crafts moneymakers choose this particular luxury hotel.  Yes, the views are great, and the breakfast buffet sprawls around several curved areas, and you know where you are because there are miniature emperors’ robes, in ceramics, as decoration here.  The people who work the Club feel like personal concierges. Jasper helped me out when I needed some printing done. Cherrie Lim explained the purpose of the dark glasses that were part of my room supplies(they are for watching movies on the 3D-Blu Ray set that is part of the suite’s accoutrements).Is it any wonder that last month the hotel had 89% occupancy, up from 82% a year before? WANT TO SEE SUITE 5632? WATCH THE VIDEO