The Goring Hotel, London, was where Kate Middleton spent her last night before becoming the Duchess of Cambridge (on the bizarre side, the Beverly Hilton gained worldwide notice when Whitney Houston died, Sofitel New York witnessed the supposed shenanigans of DSK and Michael Jackson dangled a baby out of a window of The Adlon in Berlin..).

Park Hyatt Tokyo will forever be associated, for some, with Bill Murray and Scarlett Johansson because Lost In Translation was largely shot there.  But top people stay here, anyway, the whole time.  No names mentioned, even if you know that the star of Sherlock Holmes was in town for its Tokyo première last week.

In the hotel's lower lobby, an open globe sculpture by Brit Anthony Donaldson (note the 'watch' that looks left behind)

Park Hyatt Tokyo is a big favourite of Tyler Brûlé, who mentions it three times in Monocle’s current guide to Tokyo.  It is also choice of many who love serene thoughtfulness.  This is a cultural centre that has invested mucho money in the senses.

When you drive up to its second floor entrance, there is nothing but steel, granite and glass, a grey, pencil-point-top sculpture that soars 57 floors above you.  It is attached behind to taller clones, the whole complex designed – like the BMW headquarters in Milan and, across the park from here, Tokyo’s Metropolitan Government building – by Kenzo Tange, who won the Pritzker architecture prize in 1987.

Like most Park Hyatts, this is an art hotel. Go inside and the picture changes.  In the lower lobby there is an open-globe metal sculpture by a Brit called Anthony Donaldson. Has someone left a Rolex by it? No, it is part of the sculpture, as is a paintbox (the gal thinks of the J Seward Johnson people-sculptures in the grounds of other luxury hotels, Four Seasons Dublin and Four Seasons Los Angeles).

One of the statues set high-up in elevators that rush you to the main, 41st floor, lobby

Get into one of the tall, glass-sided elevators and you are sharing it with high-set carnival masks or animal heads, by a local lady, Mieko Yuki. Get out at the 41st floor lobby level and you are in a huge winter garden, with real full-size green trees and, hopefully, sun streaming in through the origami-shaped glass walls and ceiling.

Walk on, along a rust rather than traditional red carpet, past the upper level of a two-floor Japanese restaurant to your right. On your left is the all-day Girandole, its upper walls a giant collage of photos of 144 café scenes in Italian cities and Paris, captured by a former modern dancer called Vera Mercer, who lives in Omaha NE (wonder if she has ever photographed its Sage, the great Warren Buffett?). 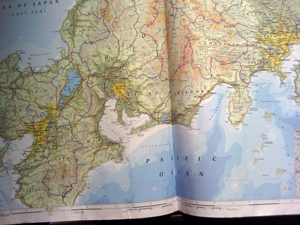 Continue walking.  It is a long, but fascinating, winding path to the reception area.  On your way you pass, either side, projecting book shelves filled with worthy tomes, including art books on every subject under the sun.

There is also a Times world atlas, standing on supports, and thoughtfully it is open to Japan.  Just as any open-minded traveller wants a local map, to know where the destination actually is in a country is similarly stimulating to the grey matter.

Now there is another elevator, to take you up to your room.   The 178 rooms here are on floors 42 through 51 – presumably Tokyo Gas, the owners of the entire tower, have some of the offices on lower floors.  Get out at your floor and you are in another fascinating, winding path, pale pistachio with some pale caramel carpet inserts.

Along your way are stands that could well support, well, busts of famous people but, instead, the designer John Morford has put a basket here, a wooden decoy duck there, a bundle of reeds, some metal dishes.

John Morford is brilliant.  He wrote the word TEXTURE loud over the 11th floor Plateau hotel-within-a-hotel in Grand Hyatt Hong Kong – which also, by the way, has Vera Mercer photos, though of nature.  Plateau is, if the memory is correct, a haven of light wood and interior angles, and a bathtub whose ‘side’ is a ceiling-high glass wall in the main room – and views across the harbour to Kowloon.

Here in Tokyo, bedrooms, or at least 4220, is a haven of more pistachio and caramel and an interior zigzag wall separating foyer from bedhead, but the bathtub has stone sides, normal height, and the view is Shinjuku…