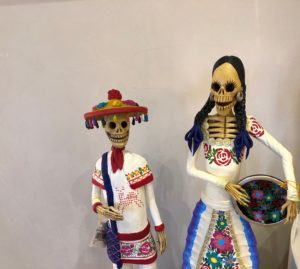 Palmilla, on a 250-acre peninsula overlooking the Sea of Cortez in Los Cabos, Baja California, was a gorgeous private home built in 1956 by Abelardo Rodriguez, son of a former President of Mexico.  It was only put on the world map after it became a One&Only luxury resort in 2004. Legendary hotelier Ed Steiner, a one-time textile designer turned restaurateur and hotelier, was the reason, along with the Kerzner family, that soon every travel agent, and every top world traveller, knew One&Only Palmilla.  Sol Kerzner’s daughter, for instance, established One&Only’s stunning NEO retail boutiques.  Here, for instance, in one of the NEO boutiques the gal found some fascinating skeleton dolls, a reminder that in Mexico Dia de Muertos, celebrated October 31 – November 2nd every year, is a joyous event remembering past loved ones. 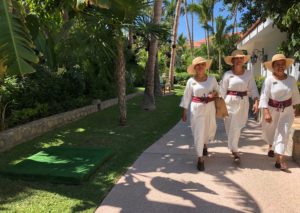 Even on arrival, or departure, you are reminded of your surroundings.  The absolutely first-class airport representive, Aldo, like all the 900 people who make the 172-room resort work, wears an outfit from Otomi Indians in the Jalisco mountains.  Whenever they pass you they touch their right hand to their heart, a lovely gesture. I knew I was in Mexico straightaway.  My room, 1423, was in the middle of three-floor Casa Elcanta block, and I had a sizeable terrace looking down at manicured gardens, and then the blue sea – see a video, below.  This was really convenient, right opposite the kids’ club, handy for those with little ones, and a good hike along to Pelican Beach, for those who must have a sandy beach (I enjoyed cutting down to the rugged shore elsewhere along the coastline). 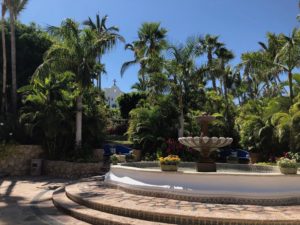 Looking up to the chapel

It was also only a few minutes from the 24/7 Technogym and the adjacent spa, where the divine Bastien Gonzalez holds court when it comes to nails, both for hands and feet. I took a hike up from the gym to the hilltop chapel, which would be perfect for a truly memorable wedding,  Have the ceremony in the chapel itself, which has eight pews, each holding up to six, and then emerge into a circular courtyard for photos. The resort can do total weddings for up to 250, presumably with much of the celebration held elsewhere. Another appeal of getting married here must be the food reputation, with restaurants from both David Larbi and Jean-Georges Vongerichten, who offers SUVICHE ceviche and sushi, and a market concept. 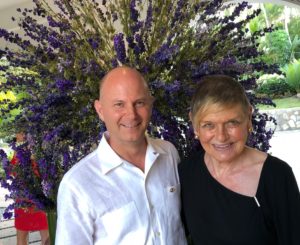 I dined with Richard Sorensen, an old friend from The Peninsula Tokyo who arrived here only yesterday as Manager (his boss, GM Robert Logan, was away on a sales trip to Los Angeles). We ate in Seared, and for both of us it was an introduction.  I loved the way servers Lars and Riccardo both had, as did colleagues, their names embroidered in big orange letters on floor-length linen aprons – so much more agreeable than hard-to-read lapel labels, which are so often askew anyway. We drank a local Hilo Negro 2015 blend from Valle de Guadalupe, and Richard Sorensen, who had done his homework before arriving here, told me that as well as Mexico’s renowned Mezcal and Tequila spirits I should look out for Raicilla, already making headway sales in the USA, and also for La Venonosa, and Estancia Raicilla.  I thought how weird to be learning about a ‘must drink’ beverage in the cutting-edge US liquor market, here in marvellous Mexico, but then it is a feature of luxury hotels to be (just) ahead of the game. As I left One&Only Palmilla, by the way, I was waved off by at least a dozen team members, all bar one – Richard Sorensen – in their Otomi-style gear. AND NOW SEE A VIDEO OF ROOM 1423