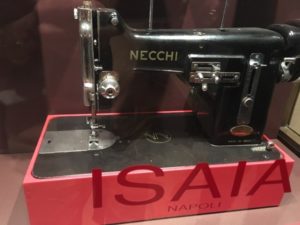 What is now Viceroy L’Ermitage Beverly Hills has, like a Hollywood star, been through various guises – since it opened in 1998 it has been Raffles, a Preferred member, an independent, and more. At one point it had a JAAN restaurant that offered one special booking per evening, $2,500 for two and stay as long as you like. Now, thanks to incredible and stylish spend by its owners, the Low family, originally from Malaysia, it is much more fun, a luxury hotel that is full of tender loving care, with lots of touch points. See the restaurant’s outside sign, on Burton Way, above, says the gal – and see, also, the lobby vitrine which promotes a Naples-based celebrity tailor, ISAIA.  The company has a Burton Way store, ISAIA Beverly Hills, and its clients include Matt Damon. Cleverly, it here shows a vintage Necchi sewing machine with, above it, 16 large spools of brightly coloured thread. 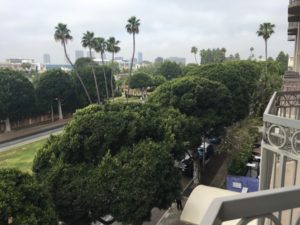 The 161 bedrooms and suites, which start at a staggering 680 sq ft, are now, thanks to SFA designers, champagne and lavender-blue hued. Suite 504 was so large I felt I could dance around, but that would have been more fun with Fred Astaire (or even Michael Flatley) on hand. I had two small terraces, with French windows that open for lovely fresh air. A big leather box fascinated me, but later, at night, I found it put out, open, to display specialist cleaning and other tools for one’s bespoke shoes. Cleverly, this is as a result of a partnership with Pasquale Fabrizio, the company founded by former Italian soldier Pasquale Fabrizio, 1926-2008, who became bespoke shoemaker to Cary Grant, Dean Martin and Frank Sinatra and whose company today is the saviour of existing shoes (what Bastien Gonzalez is to feet, Pasquale Fabrizio is to what they wear).  Sadly, there was barely time to look inside the box before hurrying down to dinner. 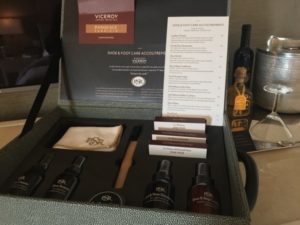 Avec Nous is indeed, as its name implies, a French bistro – chef Olivier Quignon used to cook with Daniel Boulud. I loved his crostini-and-chips suggestions, say foie gras mousse with apricot, but went more traditional, namely a French-US version of a caprese, with wild arugula, and fingers of Angus culotte, with peppercorn butter (there was no room for the finishing candy cart tasting). Another memory is of our wine, Francis Ford Coppola’s Virginia Dare American Pinot Noir 2015, from Geyserville, Russian River. This was actually the first Californian winery, opened in 1835, and the wine was named for Virginia Dare, who, when she was born August 18th, 1587, was the first English baby born in the British Colonies. Her parents, Ananias Dare and Eleanor White, called her after the new settlement, Virginia. 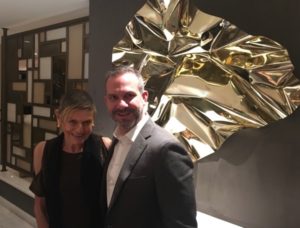 Today’s bottle is moulded in the style of old, with a crinkled pattern – and the wine was really nice too, as you would expect from anything associated with Francis FC. Then, as we finished our meal, we, GM Alex Novo and I, rushed outside to the crinkled sculpture behind the hotel’s front desk. There was just time for a quick photo before he dashed to the airport, for an overnight redeye to New York. Yet again I thought that if anyone says running a luxury hotel is a sinecure, they are badly wrong.  As for me, I went upstairs, for a good night’s sleep and, in the morning, a wake-up workout and a look at the ninth floor rooftop’s outside pool. Breakfast is a delight: there seem to be three connecting areas of Avec Nous so everyone chooses the nook that best suits them. The simple A4 menu sheet has a woman’s silhouette drawn on the reverse (it is by Jean André): specialities include a lobster omelette, or smoked trout and eggs, but I went simple, with a Go Big beet smoothie from Clover Juice, and excellent Caffè Umbria from a big thermal pot.  Now, if you want to see the suite I had sadly to leave behind, here, SEE THE VIDEO BELOW