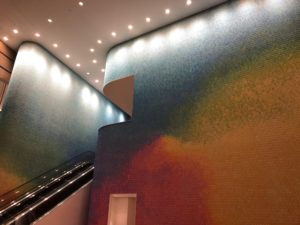 The ground floor lobby’s walls have over 180,000 tiny ‘men’ in fretwork

Sometime even the most-efficient plans go astray and luxury hotels are at the whim of transport getting visitors to and from the place – think of the temporary closing of Denpasar airport late November, as a result of fears of volcanic eruption (this meant visitors could not get to Bali, and those there could not leave). Well, the gal was looking forward to a fabulous French dinner at La Boucherie on the 71st floor of InterContinental Los Angeles Downtown, but unfortunately the flight that was supposed to land at 1355 was over six hours late, so dinner never happened. Fortunately, however, the plane did eventually arrive, and the hotel is so spectacular that a truncated stay merely whets the appetite to return, to do this $200-million, 889-roomer justice. 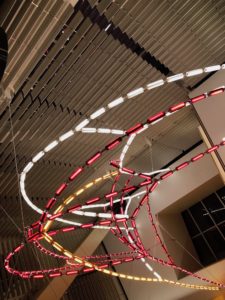 Nearly NINE HUNDRED rooms? When today’s luxury is increasingly about small is beautiful, why build such a giant? Well, said GM Jean-Jacques Reibel, a positive Frenchman who always sees the half-full, rather than the half-empty, glass, the hotel can do weddings up to 1,800 people. Double’em up, two to a room, and the hotel is full. Make sure that there is at least one wedding a day, perhaps with Christmas Day excepted, and you have 100% occupancy year-round – as it turns out, the hotel, which opened June 23rd, 2017, is doing very nicely, on weddings, plus having at least a hundred rooms taken every night to accommodate Korean Air crew (the airline’s parent, Hanjin Group, also owns the hotel), and many by ‘corporates’; CityNational Bank, PWC and Wells Fargo and dozens of other global giants have significant headquarters within a couple of blocks. 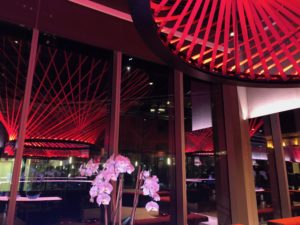 Arrive at the hotel and at ground level you find, inside, a two-floor wall, rainbow-hued, which is in fact formed of Do Ho Suh’s fret of over 180,000 tiny men – see a close-up, above. Rise to the 70th floor lobby and overhead, here, is a mobile of red, white and golden-yellow lights. This is a reminder of freeways all around, traffic red and forward lights and, I guess, the golden sun coming up in the morning. There is more red, and masses of it, in the gym, a really outstanding 24/7 Technogym facility. But so much is outstanding about this hotel. 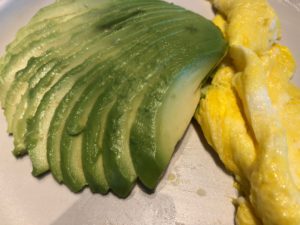 I had a private tour of the 73rd floor rooftop, which normally opens at 4.30 p.m. – this is a great venue for parties of up to 200. I loved breakfast in the brilliantly-named Dekkadance, on the 69th floor (I think this is the first time I have seen a whole spread of flank steaks ready to be carved to order, at that early hour, but the buffet also has Chinese, Japanese and of course Korean specialities, and being InterCon and California, no-one turned a hair when I asked for avocado alongside my plain omelette). 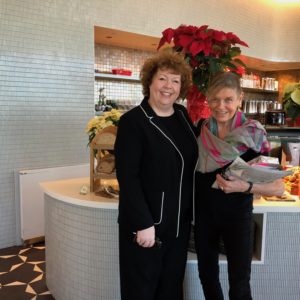 Jean-Jacques Reibel was away – I was looked after in his absence by another long-time friend, Karen Watt. The fact that this luxury hotel ran so superbly in his absence is testimony to the skill and dedication of the 700-strong team here, chosen from over 3,000 applicants. As I was about to leave Suite 6510, which allows access to the light-bright Club Lounge on the 70th floor, I realised a young bellman was waiting outside, in the corridor. Have you been here long? No, only about ten minutes, he said with a smile. He, Daniel, had been with another hotel but had wanted to move because he had always aspired to work for InterContinental. My last words were that I looked forward to seeing him as a General Manager in years to come. NOW SEE A VIDEO