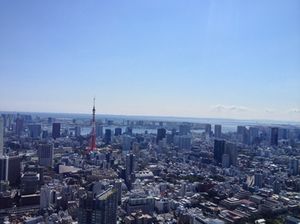 Another city, another luxury hotel that is also Ritz-Carlton. The gal is back in the sensational Ritz-Carlton Tokyo, on the top nine floors of Tokyo’s tallest building, the 54-floor Tokyo Midtown complex, on the site of what was once the Self Defense Agency. Look out of the windows of corner suite 5312 by day and it seems that the whole of Tokyo is spread below you – at night, you have a twinkling fairyland of lights, including the 1958-vintage Tokyo Tower, which, at 333 metres, is 13 metres taller than the Eiffel Tower, in Paris, says the gal. 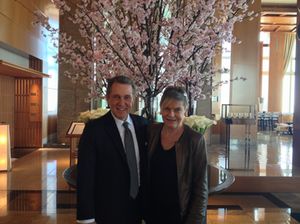 John Rolfs, boss of this 248-room hotel, is thrilled to have come back to Japan three months ago – he was here before, at Ritz-Carlton Osaka. He loves Japan for so many reasons, including its attention to beauty. Now, with cherry blossom starting, Japan is in its element.  There are 140 cherry trees growing in the Japanese garden in front of the hotel. Inside, in its 45th floor lobby, there are blossom displays galore, complementing a year-round extraordinary pair of sculptures that look like 12-foot tall tusks, and two 12 by 12 foot very shallow decorative ponds that take up a lot of space and will, apparently, remain after the lobby is redone, shortly. 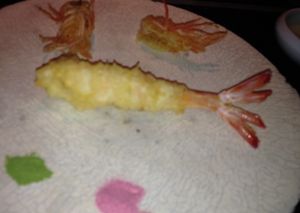 Cherry blossom gets into everything. We dined in the exquisite six-seat Hinokizaka corner, which has a Michelin star.  You sit at an L-shaped counter, and your set meal starts with a two-tier stand of exquisite delicacies, including a broiled fatty tuna sushi, a scallop sushi, hosta plant (plaintain lily) with salmon roe, grated daikon and firefly squid (plus something called dried adductor muscle – and grilled sesame tofu. Then comes tempura, with green tea salt and, as shown in the photo, cherry blossom salt. 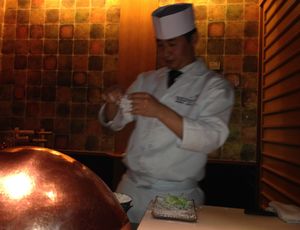 Sushi master Tatsuaki Kasamoto is like the conductor of a six-piece orchestra, turning from one to another of us to offer a delicacy, or tempt a response of appreciation from us. His cooking pot, filled with hot canola oil, is stylishly hidden behind a near-circular dome of battered copper. There is not the slightest odour, so extraction must be superlative. The six of us talk in hushed tones but acoustics are such that three couples can hear their own words, but not those of others – which is actually a shame as one of the diners is a total eccentric, a youngish-Japanese man with his head half shaved, half a dayglo scarlet mop, and different coloured varnish on each of his ten fingers. 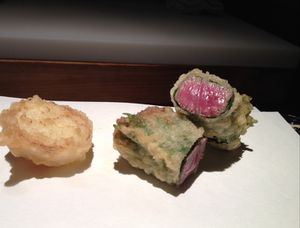 The meal continued, from tempura on to salad of daikon and cucumber, and then Kasmoto-san presented a china dish, with one-each orchid root, chunky green asparagus, mushrooms and cubes of Yonezawa beef fillet.  Yonezawa, I gather, is one of Japan’s best, alongside Kobe and Matsusaka.  He wraps the beef in a shisho (perilla) leaf before putting it in tempura batter, and into the oil.  The result is, well, eulogistic.  We go on to kakiage, which means mixing items together before putting into the tempura batter, a kind of tempura-ed collation, and on to tempura rice and pickles, and stop before dessert. 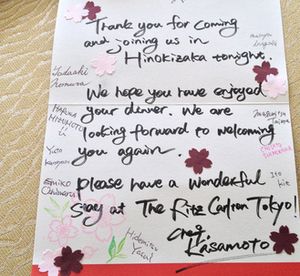 Thank you letter from the sushi team

Afterwards, as a take-home gift, I get a letter from the sushi master, and signed by all those who have helped make this meal so memorable – the brigade behind the scenes, the ladies in kimonos who stand behind you as you eat, clearing plates and replenishing drinks.  Yes, you have guessed, the letter is decorated with paper cut-outs of cherry blossom, yet another way to remember this luxury hotel, which actually has so many distinguishing points.  Here the bicycles to borrow for local exploration are pale pistachio Bianchi. Here there is a pets’ shower room for the little pooches belonging to those living in the hotel’s accompanying residences – and for those with time, do head into the adjacent shopping mall to see the pets’ beauty parlour (a friend tells me, by the way, that if you want to board your dog while you are travelling, standard Tokyo rate is US$100 a night).