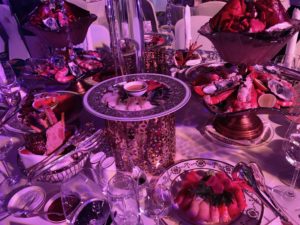 Some events are here-today, gone-tomorrow.  Many individual luxury hotels put on elaborate fireworks displays, and sometimes a personalised show is included in special suite packages (stay in the Ty Warner Mansion at Las Ventas al Paraiso, the gorgeous Rosewood-managed here near Los Cabos, if you want your own starburst).  One of the most memorable the gal has ever seen was at Nver Mkhitaryan’s creation, the  390-room Emerald Palace Kempinski on Dubai’s Palm – see above. It was the culmination of an official opening celebration last month that actually extended over several days, though for many of the 256 guests the highlight had to be the gala dinner. Look at the table-settings, with seafood towers holding a cornucopia of just-perfect lobster and salmon for guests to help themselves while getting to know their neighbours. 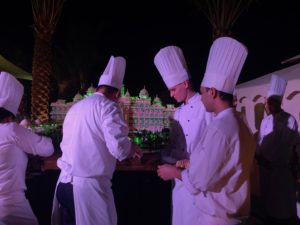 The following meal, with non-stop live entertainment from the best Ukrainian serious singers on the world stage, proceeded from Gamberoni gold caviar, chicken thigh yakitori, slow-cooked salmon, and on to Kiwami wagyu fillet.  It was non-stop Dom Pérignon 2009 if you wanted, or Chanson Chassagne Montrachet 2015 and Louis Jadot Puligny Montrachet 2015, or Ch Marius de Terme Margaux 2009 and 2012. But what about dessert? Ah ha, guests were led outside, past a quartet of female string players (see the second video below) to the surround of the mammoth pool.  Here, a temporary stage held a 40-piece Ukrainian philharmonic orchestra, whom I had heard rehearsing earlier in the day.  Nearby a table held a gigantic cake, about eight feet long, fashioned as copy of the hotel, domes and all. An almost-robotic team of chefs cut, plated and handed on slices to servers to offer to guests, who somehow had to multi-task – eat cake, drink Dom Pérignon, listen to the music, and watch the fireworks. 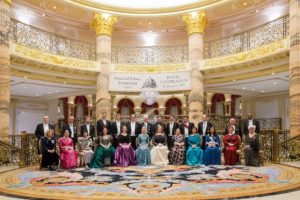 Looking back, however, I suspect that the main heritage of that minutely-orchestrated evening will, however, be the presentation of The Royal Club.  Mkhitaryan, a scientist turned real estate investor, lists dynastic history among a myriad of hobbies and interests worthy of Leonardo (he collects art and antique firearms, all working, and is the author of Man and Dwelling, a tome on the psychology of housing, published in Rome in 2016).  Working with various Imperial and Royal Dynasties, mostly from Europe, he decided to set up a network that would be social, cultural and philanthropic. The first meeting of The Royal Club not surprisingly coincided with the hotel’s party and, said the hotel’s proud owner, never have so many names from history gathered together in a 21st century hotel. 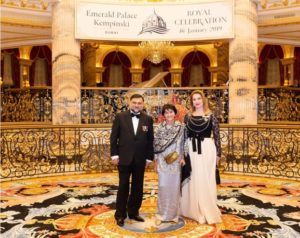 The eleven founding members of the Club, who all came with their entourages, included the head of the Imperial House of Russia, Grand Duchess Maria Vladimirovna Romanova, and the descendants of former European monarchies of Albania, Austria, Georgia, Hungary and Portugal. Yes, Europe was pretty well covered, though there is room for expansion – showing how global is the dynastic network, the evening was also enlivened by notable counterparts from Afghanistan, Egypt, Libya and Rwanda. And so, looking back, many will remember the gala dinner for so many elements, which included being next to, or at least, near ‘a royal’, and they, in turn, had a jolly good first meeting that seemed to extend over four days.  How has the luxury hotel benefitted?  Well, the organisers got ‘masses’ of thank-yous from the party’s guests, sent verbally by phone, email and social media. It is also worth noting that in the last two weeks the hotel has hosted three gigantic weddings, which surely must have been attracted not only by the Emerald Palace Kempinski’s facilities but by the publicity of ‘the kind of people who have already been there’.  And, of course, having the world’s largest Alain Ducasse restaurant might possibly be yet another attraction. LISTEN TO A POOLSIDE REHEARSAL, AND THE FEMALE QUARTET, AND THE PHILHARMONIC