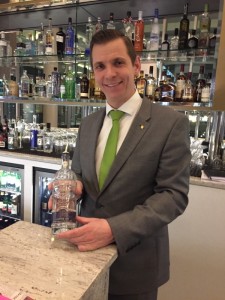 London’s £789 million Millennium Dome, designed by Richard Rogers, was built for, well, the Millennium, and its opening exhibition, which ran January 1st through to December 31st, 2000, was, frankly, not a success. But now it has been re-energised, thanks to American billionaire Philip Anschutz, via his Meridian Delta company: the structure was publicly renamed as The O2 in 2005. And now, as of December 2015, it has a luxury lifestyle hotel, InterContinental London O2, right next to it.   See the image, above, which the gal took from the hotel’s end suite 1323. If you have time, book a trip over the top of the Dome – along the lines of Sydney’s BridgeClimb – see the video below.  You may well already have booked tickets for one of the mega-shows always taking place at O2. 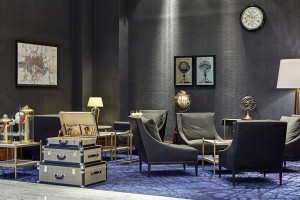 Yes, there are many wow points here. Ryan Nicholls, a charming and alert South African, took me round the 18-floor hotel. Look, we even have our own gin, he said – it is made by craft distiller Jonathan Clark, and this is batch #1, bottle 33 (its label says Clipper Gin, which is highly suitable as the gin is served in the top floor Clipper Bar, which has stunning views, through all-wall windows, over the adjacent Thames and the North Greenwich area). Ryan showed off what is England’s largest pillar-free ballroom, which easily seats 2,400. This is perfect for big-big Indian weddings, as well as car launches and mega meetings. The ballroom is connected, directly, to the 454-room hotel, which is also all geared up for lots of people arriving and leaving at the same time. 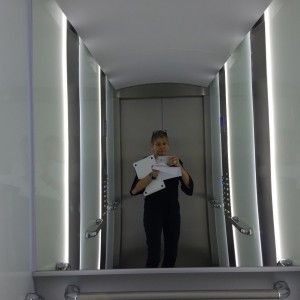 The lobby, nautically themed with astrolabe designs on the marble floor and one wall (this is, after all, the home of Greenwich Mean Time) has the concierge annex that is now an InterContinental standard. I love the fittings here, and the travelling trunks chosen by the wife of the hotel’s owner, Surinder Arora – one of his companies manages the hotel, which is an InterContinental franchise. Thanks to the owner, who apparently likes Technogym, there is really good wellness equipment, and with a 60-foot blue-lit pool, and a six-room ESPA, this would be a great weekend staycation venue. As well as the Dome, take a boat trip along the Thames – SO much to do. 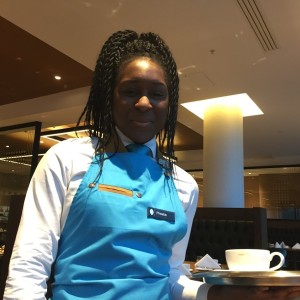 InterContinental London O2 is lifestyle, also, for sleekness of design, and being surrounded by delightfully warm people who are running this place. This is a luxury hotel that makes you feel young. I was thrilled to see three different home-made smoothies on the breakfast buffet, in small foil-topped glass milk bottles. Next to them were a choice of home-made yoghurts, with chunks of fruit. Last night at dinner, two servers wheeled up customized butchers’ tables, with inset ice trays, one holding fish, one holding meat – another wow. This morning, my last interaction was with Pheebe, who laughed and laughed when I said I wanted hair like hers.