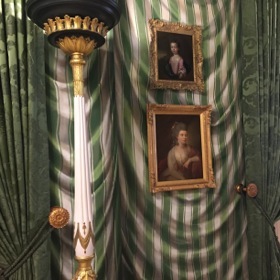 What many call Hyde Park Corner‘s leading luxury hotel, The Lanesborough, London, is often called the hotel that Geoffrey (Gelardi) built. He opened it in 1991 and he temporarily closed it, with a fanfare December 20th, 2013, for a bit of a re-do. Well, this not only took longer than anticipated (what a surprise!) but also undoubtedly cost more than the original budget. The gal had had a hard-hat preview when the building was taken back to its 1825 shell, and it was hard, now, to imagine those concrete and step-over-wire days.   It re-opened, as part of the Oetker Collection, June 15th, 2015. Look at this amazing inner-drawing room shot. What is fabric and what is not? The curtains are real but the wall of ‘shrouded fabric swags’ is in fact the most meticulous painted trompe l’oeil. Alberto Pinto, who designed the new look before he sadly passed on, must be smiling down from wherever talented designers spend eternity. 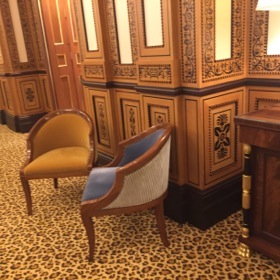 The marquetry on these walls is, however, real

Some rooms in the 93-room Lanesborough are on the masculine side. This meeting room has real marquetry on wall panels and door jambs, but it takes a lot of flair to pair this with an animal-spots carpet. In the bar not far away the walls’ marquetry is another faux – it is actually painted. What is real and what is not? The main lobby now has a fireplace filled with big fir cones rather than the year-round log-look fire on which the late Michael Winner occasionally commented. Unlike upper corridors, which are plush Regency chinoiserie, with brightest gentian carpets, the lobby is minimalist, with marble floors and plain stone walls, some real and some painted, in similar-sized blocks. 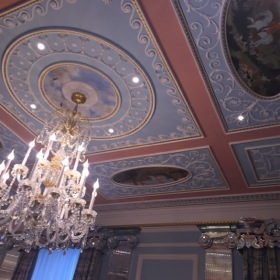 Looking up at the ballroom ceiling

Other areas are more feminine. Look at a section of the exquisite ballroom, which will hold a hundred for weddings. Curtains have mirrored pelmets, and overhead there are panels of trompe l’oeil portraits. My room, 201, was a junior suite which combined both yin and yang, with strong wood desk and eater/entertainment wall (three different Champagnes, including Krug, in the minibar) but a delicate chinoiserie corner cabinet holding the bedroom’s Samsung television, and a bed with a magnificent 12-foot high half-tester topped by one of those baubled circlets that you associate with tents for jousting knights. 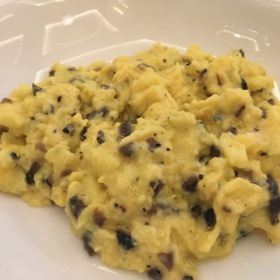 Looking down at Céleste’s magnificent scrambled egg with truffle

The restaurant has evolved into Céleste. It is still conservatory-topped but its roof is now lined with white gauze, and its walls look like Wedgwood‘s finest, palest blue with white cut-out figures. I only breakfasted this visit, and it was a dream. Crisp white linens bore blue-tinged water glasses and a buttercup-tinted vase holding roses. I had a healthy vie en rose smoothie, with lemon, pomegranate, blueberries and papaya, and, a small bowl of real, full-fat yoghurt with a little edible sign on it, ‘Lanesborough‘, as well as a square of gold leaf. The triumph, however, was scrambled egg with truffle. If that is decadence, may life be all like this – thank you to this luxury hotel for introducing me to a new post-morning-work out treat (on which subject, let me share – all four Technogym pieces of equipment in the 24/7 fitness centre offer sudoku, in three levels, and time passes much more quickly than when watching BBC World, Bloomberg or CNN).