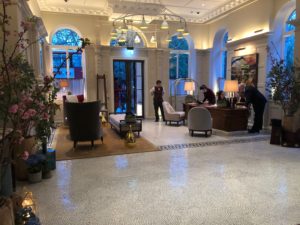 London’s newest luxury hotel, Belmond Cadogan, opened its doors end of February (it cannot, says the gal, be said to have RE-opened its doors as frankly apart from a staircase nothing remains of the original hotel, built 1887, home 1892-1897 to actor Lily Langtry, daughter of the Dean of Jersey and known as ‘the Jersey Lily, and home, for some of that time, to Oscar Wilde, who was arrested here in 1895).  Those who knew it in its former days will be amazed at the size of its lobby today (designer is GA International).  Owners Cadogan Estates have deliberately opened the whole thing up, to put it on the map.  It is now a statement.  See how splendid the doorman looks, above, in his Chelsea Pensioner + Mary Quant outfit, by former Thames Television costume designer Debbie Leon of Fashionizer. 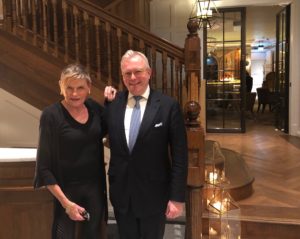 Lots of praise must also go to the hotel’s ultra-passionate GM Klaus Kabelitz. As all those who know him from years at Four Seasons and then The Berkeley, nearby, will attest, this is someone who is full of detail, and with love. The hotel now only has 54 rooms. A welcome card is almost a 3-D popup, showing an outline of the six-floor exterior. You have Jacob Jensen phones, and Bamford toiletries, as in the spa, and books fill you in on the locale. A yoga mat can be used for sessions in Cadogan Gardens, immediately across Sloane Street: hotel guests can also play tennis, or picnic in the gardens. Five minutes’ walk to the left of the hotel entrance are Knightsbridge boutiques of the calibre of Dolce & Gabbana, Hermès and Pucci. Five minutes’ walk to the right, by contrast, takes you to zingy King’s Road. 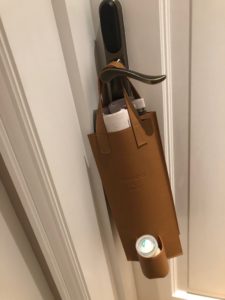 When you checked in to the hotel, you were asked your choice of newspaper – no impersonal Press Reader online facility, here – and what kind of fresh milk you would like for your morning tea.  In the morning, your New York Times, or whatever, hangs outside your door in a proper leather holster, as shown. The holster has an extension for your bottle of milk. It is only when you see this luxury item that you realise how tacky is the norm, with newspaper delivery via a plastic bag or, possibly even worse, a re-usable fabric bag that might have been used by many different unwashed hands.  The longer I stayed in this hotel, indeed, the more I realised it is way above average. My morning teacup is a bright floral design, its dominant colour exactly matching a hand-knitted cosy on the teapot that has a professional label, ‘made by Adam’s mum’. Adam is Adam Handling, the culinary guru at this luxury hotel – he is also into drinks, as his name is on the label of my bottle of English sparkling wine.  Adam Handling has had a hand in the teacup design, and all the china, made by William Edwards. 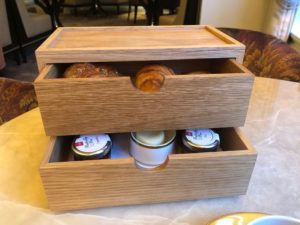 Add to this Handling’s oversight of two bars, and a lounge that does afternoon teas, and the main restaurant, cleverly reached by walking alongside the actual kitchen (those who know reserve one of the three kitchen tables, looking down at production, and, unusually, you are asked, after your first course, if you would like to help plate your main).  My meal was truly memorable, namely a pair of one-bite truffle dumplings, then a celeriac-egg-apple composition and, finally, a tranche of turbot with kohlrabi, baby shrimps and sea-herb and caviar sauce, with a glass of Seresin Sun & Moon Pinot Noir Marlborough 2013. Breakfast can be equally memorable: who else presents the ‘bread basket’ as a two-tier wooden box, pastries upstairs, butter and preserves below? See why Belmond Cadogan is such a memory-filled place? NOW TOUR THE LOBBY, AND SEE ROOM 310