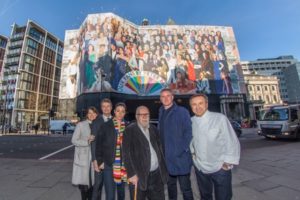 Sir Peter Blake, centre, in front of his hotel-wrap collage

Mandarin Oriental London is having a top-to-toe face lift, says the gal. The gentlemen’s chambers that architects Archer & Greene put up in 1890 is now, as a definitive luxury hotel, absolutely right for 2017 and beyond. Right now, its Knightsbridge-facing façade is still covered by a kaleidoscopic collage by Sir Peter Blake – see here, in the photo to the left, with, from left, Jill Kluge, Gérard Sintès, London Advertizing’s Alan Jarvie, and Daniel Boulud (they must have taken the photo at two a.m. to avoid being wrapped in traffic). In fact tomorrow, yes this Wednesday, April 12th, 2017, it will be announced where the building wrap goes next, and it will be taken down May 1st, 2017, to reveal the newly cleaned, nine-floor façade. 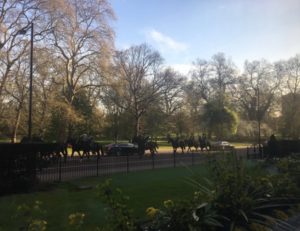 View from our breakfast table

Because of its H-shape, the 200-room hotel has remained open throughout its entire renovation. Currently the whole Knightsbridge-facing side is closed, but you are carefully directed, through the hotel’s Ballroom entrance, to public areas. We breakfasted in Heston Blumenthal’s restaurant, DINNER (OK, it still sounds odd but that is the name of the restaurant, though we were eating at eight a.m.). The view is spectacular, straight into Hyde Park. Yes, this is an urban resort. One side of the hotel opens straight into Knightsbridge, across the street from Harvey Nichols and seven minutes’ walk from Harrods. The other façade opens direct to Hyde Park, where Royal Horse Guards from nearby Knightsbridge Barracks ride every breakfast time. 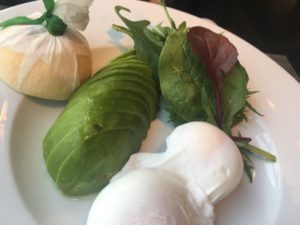 They do an elegantly bijou buffet here, with Ferme des Peupliers among the yoghurts, and Netherend butter wraps, and manageable portions of honeycomb. I was fascinated to see what my friends both chose, separately, namely poached eggs and avocado, and I loved the way your chosen toast slices (rye is SO good) come on a wooden platter. The real reason for this visit, however, was neither the view nor the food but the New Look, and after yet another cup of cafetière coffee served by a Zimbabwean in the hotel’s stunning new teal livery, designed by Studio 104, we went upstairs. Oh wow. I loved what Joyce Wang did at Landmark Mandarin Oriental in Hong Kong and here she has excelled herself. 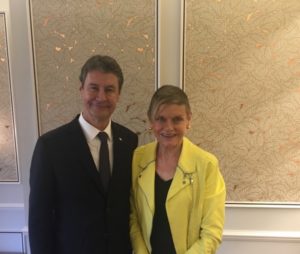 As the photo at the top of the story shows, she has brought Hyde Park into the hotel. Look at the ceiling, with its criss-cross silver bands indicating the bridle paths through the park, and the flat chandelier ending in outsize acorns. The silver-taupe wall panels symbolise a watery sun shining through the trees, and there are decorative wood stacks either side of the fire. Well-chosen hardbacks include many tomes on London, plus, for good global measure, Simon Winchester on Asia. Joyce Wang’s soft colours are also divinely metrosexual and, with so much pink, absolutely topical. I do envy those lucky enough to stay in these rooms when the luxury hotel opens them up officially, on August 1st, 2017.