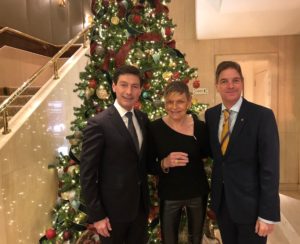 Sometimes luck is in. The gal was booked to dine with Luc Delafosse and Robert Touzel at London’s Carlton Tower and it turned out it was the luxury hotel’s birthday. The location’s landlord, the Earl of Cadogan, had wanted a hotel, to replace ten distressed old houses. Austrian architect Michael Rosenauer, who also did London’s Inn On The Park and Portman hotels, designed the capital’s tallest hostelry, rising through 17 storeys to the 18th floor (as there is no 13th), and it opened with 318 rooms (today, it is down to 216). Exactly 57 years ago, on January 4th, 1961, then-President of the Board of Trade, Reginald Maudling, cut the opening ribbon, and a thousand guests drank 423 bottles of Champagne, 144 bottles of gin, and presumably other forms of alcohol, and someone had, in those pre-machine days, to wash 7,000 glasses. The celebrations on January 4th, 2018, were more modest: the three diners had half-glasses each of Laurent-Perrier and did not even finish a divine decanted Les Tourelles de Longueville 2008 Pauillac, from Ch Pichon-Longueville, part of the AXA Millésimes Finances portfolio. 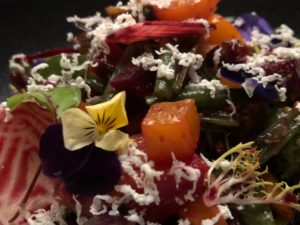 The Rib Room restaurant, opened at the same time, has been operating without interruption for 57 years. Signature remains Royal Warrant Holder Donald Russell’s roast rib of Aberdeen Angus – as above – available in 180-gram or 280-gram portions. It comes with duck-fat Yorkshire puddings popovers, and divine light-as-air, namely thick, steak fries. My dinner started with an heirloom beetroot salad, unique in that it was, as shown here, blended. I actually then went on to a dry 28-day aged 250-gram onglet, hanger steak, from a longhorn: onglet is an unusual cut, from the diaphragm, and loosely textured. With a side of sautéed spinach in a copper casserole, it was totally splendid. 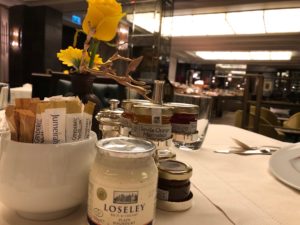 Carlton Tower, which is owned and managed by Jumeirah, has an incredible family atmosphere. Chef Simon Young seems to have been here for ever: at breakfast I was looked after by my Filipina friend Mary Lou, a 34-year veteran, and her colleague Serena, 28 years. The breakfast buffet, by the way, is copious – see the video, below. It is presented on the bar counter, with all bottles removed: later, bottles replaced, this space becomes busy with lunchtime drinkers wanting bar food. Soon, Thursdays through Saturdays, live music will be introduced, to waft throughout the bar. Also, from this coming Sunday, January 14th, 2018, The Rib Room introduces Sunday lunch: start with a complimentary Bombay Sapphire Red Snapper cocktail, go on to soup or prawn cocktail, and a choice of mains that include the signature roast, and Guinness brownies with walnut icecream or other desserts, and, first-come first-served, a complimentary journey home in a Mini Clubman. 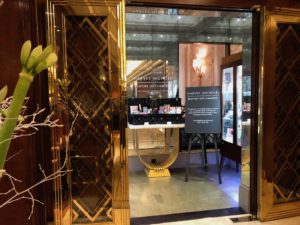 Yes, Luc Delafosse is determined that The Carlton Tower, as he calls it, will elevate the guest experience and sharpen its entire look – expect French elegance and style to make their mark (The Rib Room’s Manager and Sommelier are both French, too). And he is already, after only a few weeks at the luxury hotel, adding touchpoints. The flowers throughout public areas are now works of art – he has partnered with Neill Strain, from 200 yards away in West Halkin Street. A discreet alcove in the hotel’s main lobby holds a Harvey Nichols pop-up facility, to order gift hampers. Vitrines near the three elevators include a display of silver cocktail shakers and gins, with bottles of The Botanist, and Tailored Gin, specifically distilled for The Rib Room by Cambridge Distillery. Now that is style. NOW LOOK AT THE SPLENDID BREAKFAST BUFFET, BELOW