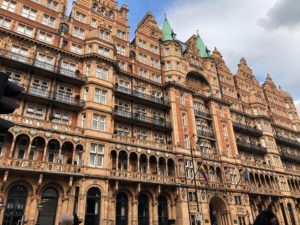 Kimpton Fitzroy London is one of those surprises that, once found, could easily become a habit.  First, where IS it? Well, walk ten minutes north of Aldwych, up Kingsway, past Holborn and its tube (underground) station and you are in Bloomsbury, an area of London which was probably named after a 13th century Norman landowner, William de Blemond. You have, on your left, Russell Square, a football field-sized cornucopia of meticulously tended greenery, colourful flowers and working fountains – and anyone can enter, and enjoy.  From there, look east, across the road to the dark apricot-coloured bricks of a classic 1900s building: it is this that, in October 2018, became IHG’s first modern-luxury Kimpton in London, with 334 rooms which seem to be full most of the time. 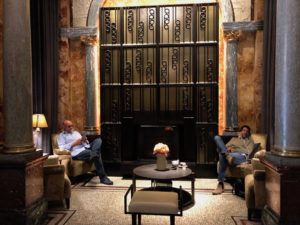 One of many fascinating lobby niches

In fact ‘modern’ is a bit of a misnomer. The exterior and much of the interior is pure 1900, when the hotel opened as The Russell.  Today’s owners, and designer Tara Bernerd – who also did The Hari, across London in Belgravia – have sensibly left as much of the original, conceived by architect Charles Fitzroy Doll (1850-1929), as possible. The lobby is a textbook example of thé-au-lait, ‘tea with milk’, dark brown and pale cream marble, a reminder that Mr Doll based the hotel on the 17th century Château de Madrid in Bois de Boulogne, Paris. He gained considerable stature as a result of this hotel, and when the Titanic was built its first-class dining room was based on the hotel’s restaurant. The only true memory of the Titanic association is Lucky George, a 75cm-long bronze dragon sculpture fixed firmly to the newel post at the second floor of the main staircase – he was one of two cast, the other one sailed on the Titanic. 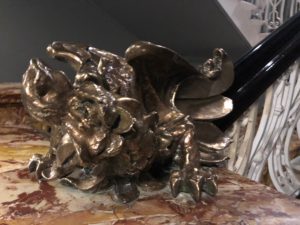 Today the hotel has an excellent 24/7 gym.  Its food offerings including the Fitz Bar, and a highly popular Burr & Co, which looks more like a free-standing brasserie. The main restaurant, Neptune, is a splendid room, with design elements that could just hark back to yesteryear, but it is in fact so up to date.  This is a hotel that of course offers, like all Kimptons,  complimentary cocktail hour wine tastings. It also has, a big plus, the UK’s champion pastry chefs.  Last month Thibault Marchand and his colleague Erica Sangiorgi won Channel 4 cult-following Great British Bake Off – The Professionals. As a result of this, covers at the hotel’s pink-floral  Palm Court afternoon tea, only served Fridays to Sundays, have jumped from ten to at least 80: lots of pink flowers. The hotel partners with Laurent-Perrier, so the savvy opt for a glass of Laurent-Perrier Cuvée Rosé to complement the best-selling flower-shaped French choux edible delicacies. 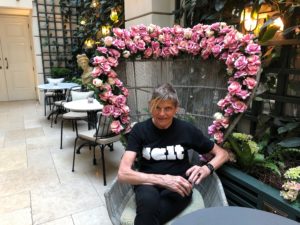 Selfie in the Palm Court

Favourite rooms certainly overlook Russell Square. I found suite 356, up 82 stairs from the lobby, really comfortable. A now-decorative fireplace was a reminder that when the hotel opened all rooms would have had working coal fires, and by contrast bathrooms would have been shared. Colouring throughout was shades of taupe, enlivened by a scarlet phone and a scatter cushion on the bed that seemed to have all the colours of the rainbow and more. I had at least a dozen proper, hardback, books.  In fact an entire stay here is utterly agreeable. You are two minutes’ walk from Russell Square tube station – tale the Piccadilly Line to Knightsbridge for Harrods, Harvey Nichols and Sloane Street’s designer boutiques.  The hotel is also only six minutes’ walk from the British Museum, and with the outdoor appeal of Russell Square, no wonder the occupancy at this thoughtful luxury hotel is so high. NOW SEE SUITE 356