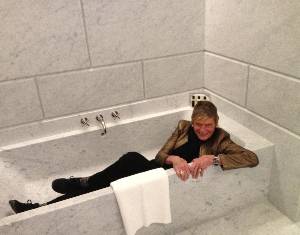 Would anyone dare put an all-marble bathtub into a designer home – or luxury hotel – today?  There was a copper hip bath, for display purposes only, at the Negresco (get into it, filled with hot water, and you would burn).

My grandmother used to have an all-marble tub.  You got into it and even if the water was near-boiling you nearly froze from the cold marble.  That item ended up in her garden, filled with rose bushes.  Well, the gal has a new version, here at Hotel Café Royal London. 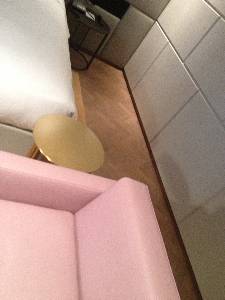 Brilliantly, David Chipperfield, designer of this amazing historic-but-new hotel, has put under-heating into the marble, so it is slightly above room temperature at all times.  The bathrooms have solid marble walls, with heating behind.

The adjacent bedrooms have walls of big Portland stone blocks, like 18 inches high by two feet wide, all bevelled edges. Everything is just above ambient, even with no heat-control on, but then there are no air vents.  What is happening? Well, the walls are all double.  This is like a conjuring trick.

But then how do you conjure up a 160-room Leading Hotel out of a legendary 1876-vintage dining venue, a few yards from London’s Piccadilly Circus? 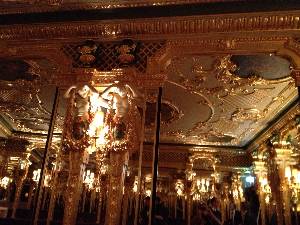 The amazing gilded ceiling of the Pompadour Room

It takes the Alrov group to have the imagination, and one imagines a few shekels, to do this.  The main entrance, on London’s Regent Street, is as-was, when Charles Forte ran it as a series of events rooms.

The revolving door is still the same, leading to a stark, understatedly simple lobby, its logo N still in the original fine-tiled floor (N for Daniel Nichols, who built the place). The walls here are pale lemon Siena stone.

The ground floor bar, today with a solid-steel bar and green glass and saddle-stitched leather walls, and an absinthe dispenser, now looks out at a massive Whole Foods store.  There is a wannabe-Apple Nespresso store next door. 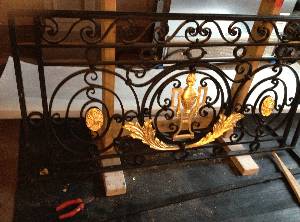 Railings are wrought iron with yet more real gold-leaf adornment

The hotel opened on December 5th, 2012, and the restaurants began to open this very week, December 10th, 2012.  Ten occupies a two-floor lobby-like space.  Again, expect no frills, bells or whistles.

The upper level is an all-round gallery for the members-only hotel Club (they also have their own bar, and the Domino restaurant, named because that is where gentlemen retired to, after dining downstairs).

This is my kind of food, English by that very-English chef, Andrew Turner. He suggests dishes like Goat’s cheese with Secretts Farm beetroot and pine nuts, and Dover sole. The chic server came from India, via The Savoy. 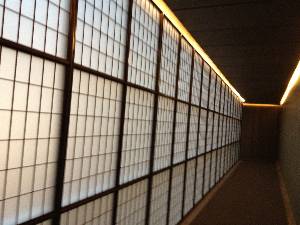 You can take the oval staircase, with its black wrought-iron and gold leaf balustrades, right up to the seventh floor, or use one of the elevators (new, but the original doors going back about a century).

You pass rooms gilded beyond belief. They must have used much of Fort Knox embellishing this room.  Louis Sailer, the GM, says he certainly thought he had half of Italy working here at one time or another. I have noticed before, incidentally, that many of the gold leafers are female.

Upper corridors are mostly pure Italy, unpolished oak, floor to high ceiling walls and floors also, inset with same-colour carpets (a few walls are, in fact, original Art Nouveau, in situ). Room numbers are lighted numerals set into the oak.  Press the privacy button inside and the lighted numbers outside go red. 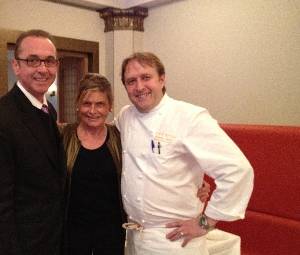 Inside, your room has those stone walls, and more oak, on the floor. Furniture is softest leather, softest colours, say a lemon sofa and a peony-pink chair, hand-made in Italy.  Curtains are Irish tweed, oak-coloured – windows are so-many-times glazed you cannot hear a squeak from busy Regent Street outside.

Bedsheets are Italian, but the television, Bang & Olufsen, is Danish, and is the largest standing set, about one centimetre thick, that I have ever seen. The soaps and other ‘smellies’ are English, Floris, just like the Queen uses.  I bet she would feel right at home in this place.  Tradition, up to date and full of understated quality.