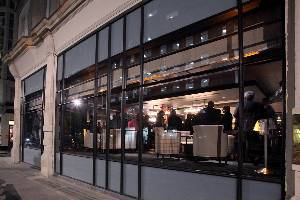 The Blue Boar pub is, actually, part of the luxury hotel that is InterContinental  London Westminster but few who use it would know that.

You walk along Tothill Street and look in through big windows at a place that is heaving with political heavyweights, networking (the pub, which opened only November 29th, 2012, is named after an old inn that stood in nearby Parliament Square from the 15th to the 18th centuries).

Today’s pub has stand up and sit-up bar counters, and low seating, and private rooms, and a display of historic gins as well as such 27 new ones as Hendrick’s and Sipsmith and cocktails that include a Paddington, with aged rum and English marmalade on the rocks. 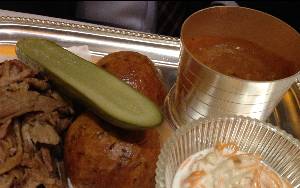 The pub comes with an adjacent steakhouse, American style, with superb acoustics so that no political heavyweight’s conversation can be heard by anyone other than those at his, or her, table. 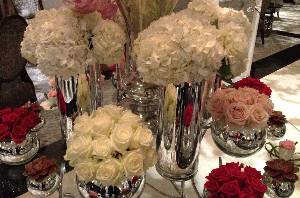 Flowers in one of the two lobby lounges

There are exquisite flowers elsewhere in this 254-room hotel, right opposite St James’s Park tube underground.  The arrangements in one of the two lobby lounges, where many gather for afternoon tea, are just divine – the other lobby lounge, Emelyne, for the suffragette Emelyne Pankhurst, is more formal, and I found more masculine, but I did not coincide with the martini trolley that is sometimes based here.

The bedrooms, by the way, are far from masculine.  End suite 519 had everything a gal wants, from in-mirror televisions to excellent lighting and Miller Harris shampoos and, bliss oh bliss, not only a Nespresso machine with a sachet of proper milk but a free minibar (which includes a smoothie) and, unique I think for InterCon, free WiFi. 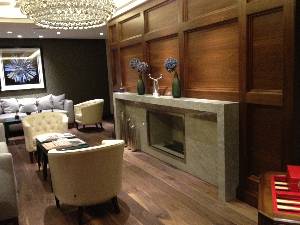 There is a business-like Club lounge ...

The Club lounge is intelligent, but this is an intelligent hotel, aimed at top business people, coming to see the politicians and local businesses, including Jimmy Choo and Google and Microsoft, and it is also incredibly handy for Westminster Abbey and lots of civil service divisions, and also for Scotland Yard.

This is a great place to feel entirely safe, because of all the important people around.  Stay in a club room and you will wonder who is sitting next to you in the club lounge, but then that can be said of many club lounges. 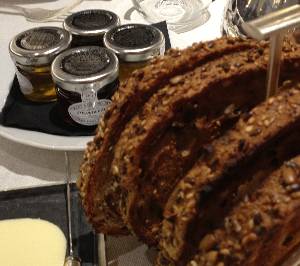 .. but local Important People breakfast in the Blue Boar..

Come breakfast, in your room, in the club lounge or back in the Blue Boar, you know you are in England – apart from the fact that the coffee is so good you know it must have been made by an Italian.  The yoghurt is so yummy you want to slather it on your face (is it as good as what L. Raphael puts on you, at the Martinez in Cannes or, in Paris, at Four Seasons George V?).

The butter comes on a little slate in a silver dish, the jams are English, as on British Airways, and the full-of-roughage-and-goodness sourdough wholewheat toasts come in an old-fashioned English toast rack, silver of course. 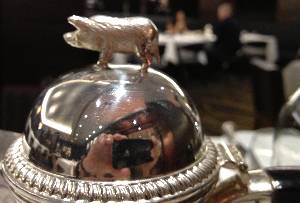 .. where the coffee pot has a boar standing on its lid

And the coffee, too, comes in what I would call a silver pot, Georgian style, with Marilyn Monroe-proportioned outline and an elaborate handle that is inset with black non-metal to stop you burning your hands.

The highlight, however, must be the little boar that sits atop the coffee pot’s lid… and by the way we are talking blue BOARS and not blue BORES, since blue is the colour of the UK’s Conservative party.

This luxury hotel is full of interest, and more than worth every minute of your stay…