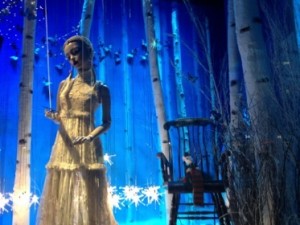 One of Harrods’ 70 fantastic Christmas windows

After the fantasy of Beverly Hills, it is now time for the gal to look at fantasy far far east, in London – at Harrods. The windows this Christmas are out of this world. There are no less than 70 windows to ‘dress’, technical term, and they start planning up to two years ahead. Big windows have mannequins like this, some of them moving puppets on strings. Tiny windows showing ‘below ground’ mouse houses, with mice in human dress going about their daily business, and snow falling from ‘above groun’. The display must do wonders for luxury hotels around in this highly-desirable Knightsbridge part of London, says the gal. 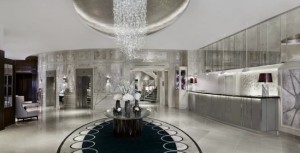 The fantasy of the hotel’s re-done lobby

Certainly the Luxury Collection Park Tower, the hotel that was once known as Sheraton Park Tower, is full, and the bellmen are working non-stop taking enormous numbers of enormous suitcases out to chartered vans, and bringing more similarly-sized suitcases in. It is extremely difficult to find the beautiful lobby empty. It is, indeed, a fantasy in its own right, especially since the wall behind front desk is also off-white, and decorated with stuck-on white and gold flowers. There are real flowers from Neill Stern and candles from Rachel Vosper, both local artisans.  This is obviously all part of the elevation of the hotel, bringing it up to Luxury Collection (I think they have also elevated the mattresses, which are superb, really supportive).

This is a 24/7 hotel, boosted by an adjacent casino – yes, they do have them in London, though not to a scale comparable to Los Angeles, Macau, Singapore and, now, Manila. The business centre is a clever do-it-yourself, for free, opening off the lobby lounge, where hotel guests perhaps related to Harrods’ owners like to sit at any hour of the day and night. The good gym, reached down 16 avocado-carpetted stairs from next to the cigar shop, is open 24 hours. All the better, you might say, for getting to know the locale. In the next block is Harvey Nichols, which is Hong Kong owned – it now has a female CEO, Stacey Cartwright, and I am appalled she allowed really macho and un-Christmas-like windows this year (Girlahead rating is Harrods ten, Harvey Nichols zero).

A book page shows Mosimann’s then, left, and now

Back at this Luxury Collection hotel, I admired its dedication to the area around. The hotel manager, Sue Finlay, showed me a copy of Brian Girling’s Belgravia & Knightsbridge Through Time, Amberley Publishing 2011. There on page 19 shows the 1882 Presbyterian Church in West Halkin Street that later became first a private house and then the Belfry private club – and then Mosimann’s, that centre of conviviality and fine eating where Anton Mosimann and his sons Mark and Philipp still serve ‘the’ bread and butter pudding, as shown yesterday.