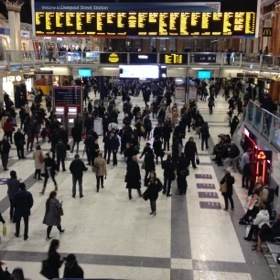 London Andaz Liverpool Street, one of only two Hyatt hotels in the English capital, is one of the rare luxury hotels that is directly above not only an underground/subway/metro station (Central, Circle and Metropolitan Lines) but also the busy rail terminus of Liverpool Street station. This is a hotel that is an essential part of the community – it is within under 15 minutes’ walk from London Bridge, St Paul’s Cathedral and the Tower of London. At the station, look down at its concourse and day, and evening, long it reminds the gal of an L.S. Lowry painting, with stick-like people coming and going. 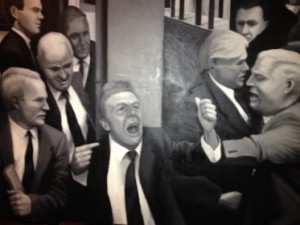 As a result of commuters to banking, finance and other daily concerns in this part of town, the hotel’s restaurants are always busy. I was the only hotel overnighter, I think, breakfasting in its Eastway brasserie shortly after it opened at seven o’clock – the several other occupied tables were obviously regulars, on their way to work. More coming and going showed up in a wall-hung image that I passed on my way back, via the restaurant’s hotel rather than Liverpool Street external entrance. This purported to show bankers from previous days behaving as badly as politicians do in some countries, particularly in (no I will not say), today. 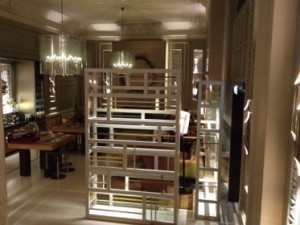 At the end of the working day, when the same commuters have had their fill of making money, there is a regular coterie of men and women who congregate in the hotel’s pub and other bars to network, catch up on what is really going on.   I joined the hotel GM, the livewire Tim Flodin, for a Tanqueray 10 gin and tonic in the Champagne Bar. Clever idea, first for Sir Terence Conran, in 2000, to convert a classic salon, designed by Sir Charles Barry’s son and grandson in 1884, into a seafood restaurant. Even more clever for the current team to close said restaurant, put in a few faux climbing frames and a Berkel slicer, and run it as an elegant bar, with charcuterie. 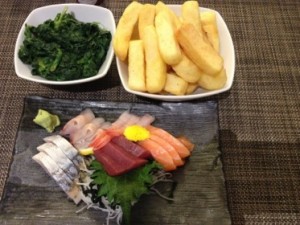 I wanted to try the luxury hotel’s room service, which is another clever idea. As well as design your own salad, or pizza or pasta, you can choose from the many hotel restaurants. I think I designed the ideal sybaritic single meal, mixed sashimi of mackerel, prawn, salmon, seabream and tuna, with sides of outstanding chunky fries (which the English call chips) and spinach.