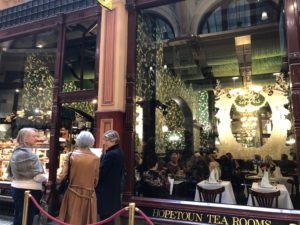 Sometimes a luxury hotel can be so well located it is a magnet for business and for leisure, which includes sightseeing and retail. Add sport, both business and off-duty, and a property becomes indispensible. The Langham, Melbourne, ticks all those boxes.  On the south bank of the Yarra River, it is in the city’s Southgate area, seven minutes by the pedestrian Sandridge bridge across to Flinders Street station and thus to CBD (Central Business District) and a further seven minutes north up Queen Street to the pedestrianised Bourke Street shopping centre. You can also divert to some of the city’s fascinating side streets and arcades – the photo here shows Block Arcade’s Hopetoun Tea Rooms, owned by Kon and Kelly Koutoumanos.T 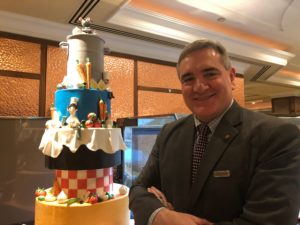 Talking of tea, The Langham Melbourne has just had, with official permission, a Barbie-themed afternoon tea – over 3,000 guests, mainly little girls and their mothers, came rushing over a period of three weeks (the next themed tea, for the Jurassic Coast, may attract more little boys).  The hotel knows its local market.  It opened in 1992 and operated as Sheraton Towers until 2005, when it was bought by the Langham brand’s owner, Great Eagle.  Today, it has 387 rooms – favourites overlook the river, see the video below of end suite 2004.  It has 480 employees, who include those working in the bakery and laundry. In a city with unemployment at under five percent, how does the hotel manage to find people. 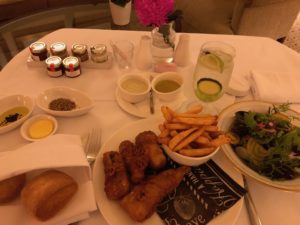 The hotel’s MD, Andrew Jessop, explains that he believes in involving existing team members in the hiring process. At job fairs, interested candidates meet panels from the hotel that always include at least one line-staff representative. This has all kinds of advantages, including the fact that a new hire, even on day one, already knows at least one person from the hotel. With Australia’s naturally laid-back and friendly outlook on life generally, this helps with quick building of the team spirit.  Andrew Jessop explained this to me over an early cocktail in the busy Aria lounge bar before he rushed off to an event and I rushed back up to my suite to have a room service dinner before much-needed sleep (what did I have? Fish and chips is a staple here, and I liked the way that my four big nuggets came with really old-style English chips and, a modern innovation to the dish, a side salad). 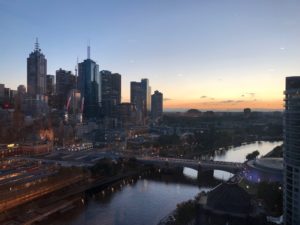 Sun up, or coming

The morning sun came up far too early, but fortunately the Technogym, which has 150 outside members, is 24/7, and I could get to the 24th floor Club lounge, which has an eggs-to-order chef, in time to breakfast before going down at 7 a.m. to call an Uber. There, already, was the hotel boss.  Had he come in specially to see me off?  No, he explained, he is always in at that hour, sometimes to spend 20 minutes squeezing juice, in front of guests breakfasting in Melba restaurant. On other days he will work as a bellman, or on front desk.  That surely must help team morale, and also help explain the fact that this luxury hotel’s customer satisfaction has gone up 11% over the last year.  AND HERE THERE ARE VIDEOS, FIRST OF ROOM 2004 AND THEN A SHORT INTRODUCTION TO WALKING MELBOURNE’S FASCINATING LANES AND ARCADES