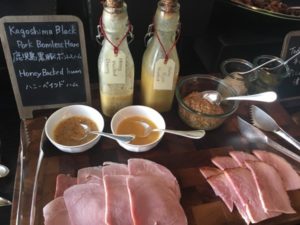 As the gal has said before, a luxury hotel run by someone who is passionate about food definitely has the edge when it comes to that property’s food and drink offering. This is certainly the case at Shangri-La Tokyo, where GM Marcus Bauder’s eyes light up at the very mention of Japan’s artisanal products. He is fully supportive of his Italian chef Andrea Ferrero’s obsession with any edibles that are natural, and organic. The hotel’s breakfast menu, for instance, includes yogurt from Makae Ranch, Mount Fuji, preserves from Nakahira Farm, Nagano, and butter from Taiki Farm, Hokkaido. As well as the buffet, incidentally, there is an à la carte menu which has a separate eggs benedict section, with six offerings. 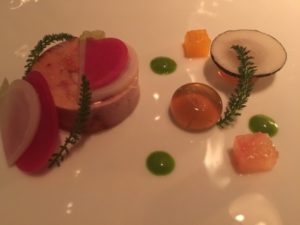 Over the past few months Marcus Bauder has been sending his chef, with a film crew, to distant parts of the country, to make short videos of the baker who studied pizza making and uses half-Italian, half-Japanese water in his sourdough loaves. There is a farmer at Nanshu Farm, Kagoshima, who produces a little proscuitto, but has a waitlist of six months. The results have provided non-stop YouTube material. which is shown in the four elevators of the 200-room hotel, and elsewhere – see one of the stills, at Aomori Prefecture, in the north of Japan, at the top of the page. Even though it requires an elevator to get there, the hotel’s main restaurant, Piacere, on the 28th floor, behind front desk, is highly popular. The knowledge of its products certainly draws locals in to eat. 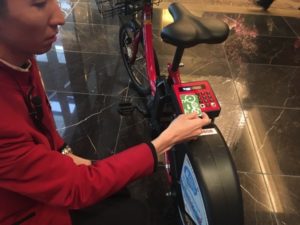 Getting ready to mount a Docomo rental bike

Lunchtime is a sell-out to young mums and housewives, as any woman not working is called. Dinner is Japanese couples. We dined, and were undoubtedly the only people not going for one of the multi-course set menus that are the automatic choice of most Japanese. Marcus Bauder and I both started with amuse of a standing egg shell filled with a fabulous yuzu cream, and a bite of a seafood carpaccio held on a big clear doughnut. Since he was joining 34,999 other runners in the Tokyo marathon in two days’ time, he went on to pasta. I had one of Andrea Ferrero’s creations, a torchon of Ankimo (monkfish liver) cooked in monkfish bouillon, shaped, sprinkled with Aomori salt, served with citrus, pickled radish, and consommé jelly. 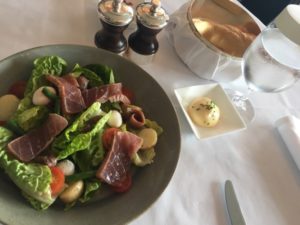 Marcus Bauder was pre-run teetotal but I was fascinated to try a Japanese wine, a Kaminoyama Merlot 2013 by Suntory: all Shangri-La’s wines are overseen, on a corporate basis, by that great England-based Frenchman, Gérard Basset MW (hope he knew why his ears were burning as I drank his health). In the morning this lovely, friendly luxury hotel provided the breakfast that I expected, and two other memories. First was taking a Docomo rent-a-bike, quite unlike the jump-on-and-go simplicity of those in most capital cities – here you should read, before riding, a detailed 40-page booklet and, at the time, you need to insert a special card into the bike, press numbers on the machine and learn to manage the gears. The final surprise was my pre-departure salad Niçoise, in my room to save time – it was just as good as anything in the South of France, even at that most Niçoise of luxury hotels, the Negresco. And then I was on my way. PLEASE SEE THE VIDEO OF THE SHANGRI-LA SUITE, BELOW.