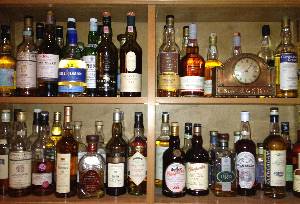 Summer Lodge's bar has over 200 whiskies, including priceless Japanese

Summer Lodge, that idyllic country-house luxury hotel in deepest Dorset, England, might be up to date, with its spa and fitness facilities.  It is also tradition, with a capital T.

The bar is a real snug, with fabric walls, much-used leather sofas and deep chairs, and a real-log fireplace with a fender that you can sit on, to toast yourself as much as you like.

This is one of the world’s ten best retreats, for a good book, and a great companion, and memorable conversation. There are over 200 whiskies on display, including about 30 Japanese whiskies, some of them extremely rare.  The gal saw that another shelf has a couple dozen Bas Armagnacs, from the house of Francis Derroze. 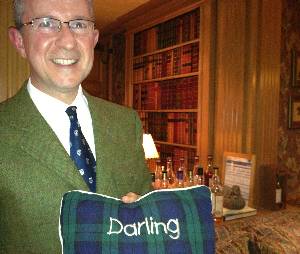 Charles Lotter, who comes from a military family in South Africa, rules lovely Summer Lodge with a rod of kindness – he has the Investors In People award for staff satisfaction.

A third of his crew are English, and after that comes France and then Poland.  They do seem to like to stay – many of them have been here as long as he has, namely eight years.

Charles came from Twelve Apostles, the equally-great luxury hotel in Camps Bay, just south of Cape Town, that is, like Summer Lodge, owned by the Tollman family.  The cushion that Charles Lotter is holding here actually shows a dachshund beneath the words… 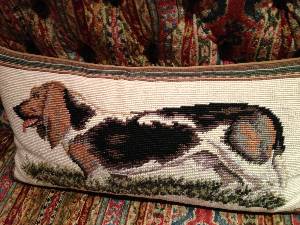 One of the many needlepointed and embroidered bar cushions

Summer Lodge’s bar is plumped up with cushions, many showing embroidered animals.  Did past guests start stitching to fill their time?  No, you are never bored here (if there is a dull moment, take a guided tour of Evershot, the village around you, and hear its history, see the working baker).

Were they done by Bea Tollman, on planes between the family’s many Red Carnation hotels?  No, I think the answer is much more mundane.  She bought them in antique shops. We sat on a couple of cushions while we had cocktails, and had a self-imposed temporary lull in memorable conversation while we studied the menu.  A honeymoon couple, in mature rather than later life, celebrated nearby. 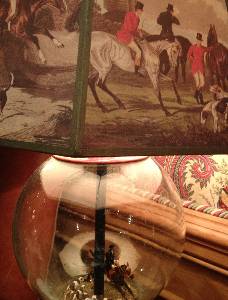 A lamp has a hunting shade, and a small hunting scene in its glass base

I was sitting by a lamp, on a beautiful wood table, that had a hollow glass base with a model of a huntsman in full gallop, with his hounds, inside.  A similar version of the story is on the lampshade above.  While we looked at the menu we were brought canapés, cheese, duck and lobster.

I was shown the doggie box: the printed menus have flowers outside and words inside say, as a member of the Restaurant Association’s admirable do not waste it campaign, do please ask for a doggie box to take home.

The boxes look exactly like Whole Foods’ help-yourself boxes.  I decided against the eight-course tasting menu.. 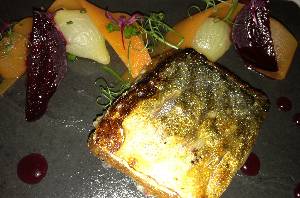 And opted to have a two-courser, but the chef, Steven Titman – another eight-year veteran – was not having it.  He sent out a lump of smoked mackerel with baby vegetables and apple, and a bread basket with near military lines of olive twirls and local wholewheat from that working baker, and a slate with two butters, one salted and one unsalted.

The sommelier, who has a Swiss father and a Portuguese mother, chose a Chinese wine, ChangYu Cabernet d’Est, which, he says, has an asparagus nose.  It is made of Gernischt, thought to be a hybrid of Cabernet Sauvignon and Cabernet Franc, from cuttings brought from Bordeaux as early as 1892. 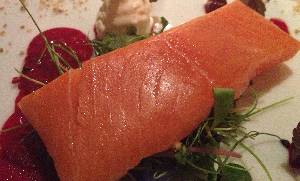 Anyway, then dinner-proper started.  Our table had a little Christmas tree on it, and the red-patterned walls around made it all seem quite Christmassy.  Bea Tollman, who does all the interiors, loves covering her walls with fabric, as she has done here throughout the entire 24-bedroom hotel.

My Loch Duart warm salmon starter also looked festive, and added colour to what could, otherwise, have been rather brown.  Mr Titman tries not to put too much greenery on his dishes – my main course cod, for instance, was with tiny chestnut gnocchi, standing up like tiny towers, and a squiggle of beetroot, but, needing green at every meal, I overcame that with a big green side salad.

And then we were presented with the cheese board, oh wow, 27 different ones on a table, and then I tiptoed up to bed…