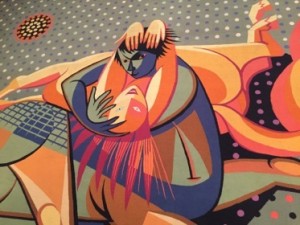 Some cities, indeed some countries, have an iconic hotel and there is nothing their competitive friends can do about it. In alphabetical order, Buenos Aires has Alvear Palace, Dubai has Burj Al Arab, Nairobi has the Norfolk, Singapore has Raffles, Zurich has Baur au Lac, and in Lisbon, capital of the charming and understated Portugal, it is The Ritz. Built 1959 at the request of then-Prime Minister António Salazar, its opening GM was Antonio Foerster (whose son J.P. Foerster later also made hotel news). Now, owned by the Lagos family, it is one of Four Seasons‘ luxury hotels with the most unique character – which says a lot, says the gal. Which other hotel has public art so bold it is almost brutalist? At the start, designer Porfírio Pardal Monteiro commissioned works from young local artists. See this tapestry, about 1.5 x 1.5 metres, Centaur, by J. Almada Negreiros, 1893-1970, in the rear lobby of the 282-room luxury hotel. It has recently been put on the room service menu, and hotel guests love it so much they look at the menu, and may even order-in instead of going out to eat. 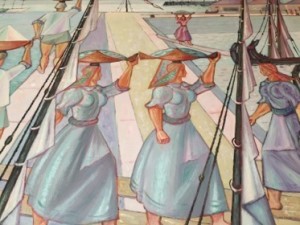 There is a Ritz Club for a hundred carefully chosen influencers (names not mentioned of course, but I wonder if they include Portugal‘s richest, namely the world’s largest cork supplier, Américo Ferreira Amorim, and Jerónimo Martins retailer Alexandre Soares dos Santos?). Club members can use the 11th floor (rooftop) gym, a 24/7 Precor set up with an adjacent glass-walled Pilates studio with equipment that could have taught the Tower of London, in its bad old days, several tricks. They can swim in the lower-ground floor pool, and charge in Varanda, and in the bar. I am amazed how many are, indeed, sitting in the bar, meeting with friends, having a snack. Nearby, here, is a pianola, noteworthy for several reasons. There are full bottles of Perrier-Jouët in it, literally, and on it. Its wood cover is signed by hundreds of VIPs, from Margot Fonteyn to past Portuguese presidents, all, it seemed, at one time visitors to the home of Carlos Botelho, 1899-1982, artist of the painting of fishwives, Barcacas do Tijo, which hangs a few yards away. When Botelho, who used to hang out here in the bar, died, he bequeathed his beloved pianola to ‘The Ritz‘. 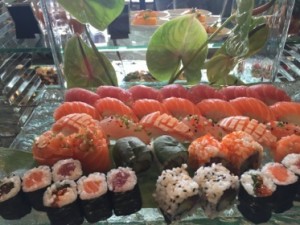 The buffet lunch is a network venue

The elevators are so educational I am tempted to go up and down, up and down. In one I read about the current white truffle promotion, starting this very day, and running through to November 22nd, 2015. Sorry to miss that! Never mind, I am about to lunch with Guilherme Costa, the Brazilian who has just returned here be GM of this lovely hotel. As at breakfast, lunch buffet tables are extensive, and absolutely beautiful, with small amounts set out on dishes at different heights. The room fills up with Zegna-suited, Ferragamo-tied businessmen (sic). Mr C explains that this daily lunch buffet is the city’s top networking for politicians and tycoons – they can deliberately coincide while choosing a selection of sushi, and whisper in the other’s ear. You cannot network like this if it is à la carte, only. This hotel grows on me more and more. 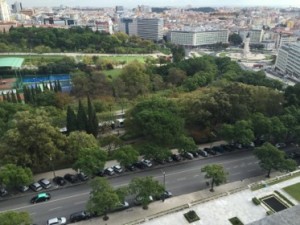 Look down to Parque Eduardo VII

I head back up to just-redone suite 932-4, which is Pierre-Yves Rochon at his typical best (think of what the maestro did at Four Seasons George V in Paris but take away just a little of the wedding-cake icing, so to speak). Here at Four Seasons Ritz Lisbon my suite is shades of champagne–silver-stone, with lots of white orchids. I have dining for ten, and a view that is unique, downhill through Parque Eduardo VII to, diagonally to my right, Marques Pombal roundabout – the Parque was renamed in 1903 following the visit of the British King to further Anglo-Portuguese understanding. I start packing, and wonder if, again, I will have one of the most knowledgeable drivers I remember, Miguel Mendes, son of a former concierge at this luxury hotel (Miguel and his wife now run a personalised tour-guide service throughout beautiful Portugal).