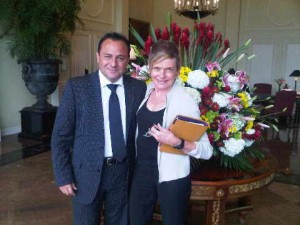 Laurent Carrasset heads Orient-Express in Peru, which means hotels, trains and ground transport. Business is good, Peru is hot property. Up at Machu Picchu the gal met a couple of New Yorkers who found their initial flight, New York JFK to Lima, was cancelled as a bird had flown into their plane’s engine.

They were so determined to do the trip they bought other tickets, to Guayaquil and on to Lima, to make it to Machu Picchu. Business gets better for Peru every year, and you can see why. 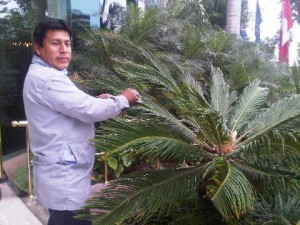 I arrived back at Orient-Express’ Hotel Miraflores Park, Lima, after a morning run along the Miraflores clifftop, and over Puente Villena bridge.

Outside the door of this luxury hotel, a keen employee was polishing a palm tree (memories abound of the old Hong Kong Hilton, many years back, when its then-boss, the legendary James Smith, always employed a cleaner to dust the escalator just as businessmen were arriving for their Grill lunch – it gave such a good impression!).  Here, at Miraflores, everyone says hello.  That is a Peruvian trait, typical of general friendliness. 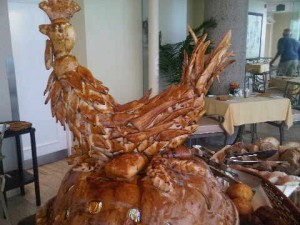 The Observatory buffet has a whole table of breads, suitably adorned

Room 1003 is perfect, front facing across Parque Domodossola to the Pacific Ocean. After a quick shower it was time to head up to the 11th floor rooftop Observatory, for a fabulous buffet breakfast that included a selection of healthy breads that Super Stéphane the master-baker makes sure are available in all his hotels.

Love the yoghurt, too, and having whole fruits as well as chunks of papaya.  The 81-room hotel was opened 1997, and became Orient-Express in 2001. 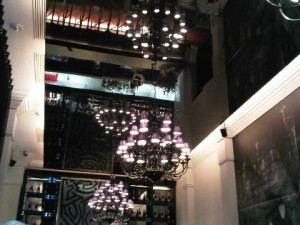 The intimate Mesa 18 restaurant has a mirrored ceiling

The main restaurant here in this Leading Hotel is Mesa 18 by Toshiro, open lunch and dinner. It is a stunning room, as tall as it is long, with full-height black and white photographs as wall panels.

It has a mirrored ceiling.  The whole area is black and white, and glass, throughout, apart from scarlet water tumblers on the 48 places inside – you can also sit on the adjacent deck, which fortunately has Bordeaux burners for warmth. 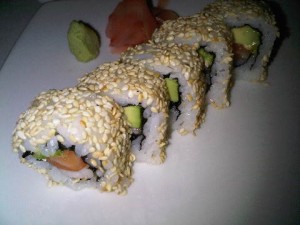 Toshiro Konishi was born in Tokyo and came here, to Peru, to help his friend Nobu.  Nobu moved on, but Konishi-san stayed put.  He has had several restaurants here in Lima but since he opened Mesa 18 by Toshiro its business has soared.  Make sure you reserve a table, even on a Sunday night, says the hotel’s GM, Patricio Zucconi Astete.

The second name in Peru is the main family name.  The last name is one’s mother’s name and yes, Patricio, himself a former engineer, is related on his mother’s side to the Astete who was first to fly across the Andes. 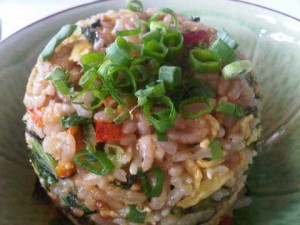 I love Toshiro’s salad so much I had it twice – well, the avocados are divine of course (Peru is the 11th largest grower of them worldwide, and I shall never forget eating them whole, peeled like oranges, on an earlier trip).

The kitchen sent out half-bite portions of tuna for us to try.  The tuna comes from Paracas, Pisco or Tumbes.  Peruvians love to eat healthily, although their traditional food is pretty heavy (Mesa 18 does have a separate Peruvian menu, by the way, but few seem to use it).

After that it was intamaki, five pieces of salmon sushi, using Chilean fish (the sushi selections are available in fives or tens and one table loved their five-portion so much they ordered repeats). And then, well, what to have next? Fish of the day was a grouper but being a tempura lover, I had to have that. 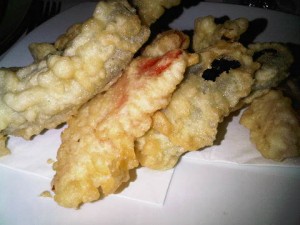 I thought of other great tempura dishes over the past few months, and MEGU of course  sprang to mind.  In a truly global lifestyle it helps the memory to compare one place or great cuisine with another.

Here I had vegetarian tempura, with a side of fried vegetable rice: being Japanese, the rice mound, the size of an inverted teacup, was studded with such miniscule snippets of vegetable one needed a magnifying glass to see them. 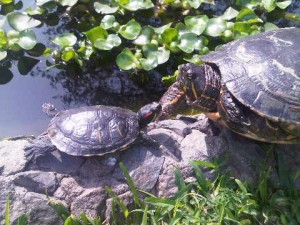 You need luck, at any time, to see the Miraflores tame turtles, who live in the shallow pond in front of the hotel.  The pond, about the size of two king-size beds, is packed with water-lily greenery but in between the leaves you can see flashes of bright orange koi.

These goldfish share the waters with at least a dozen turtles, anything up to a foot long and with stripes of orange or yellow on their necks.  Most of the time they are hidden in the water but one afternoon the sun miraculously appeared and a mother and baby climbed on to a rock for a bit of sunbathing. 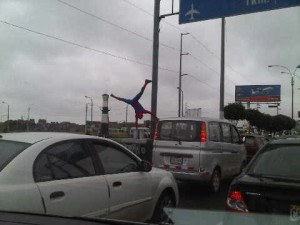 On the way back to Jorge Chavez airport, a guy in spiderman gear did cartwheels among the traffic

Yes, that was a miracle.  Generally the sun never shines until October, and the following four months offer blue skies. The rest of the year Lima is renowned for one l-o-n-g grey mist, the infamous garúa.  But just occasionally there is a surprise.

The sun appeared, the turtles rushed out (in so far as turtles rush anywhere) and, looking down from the Miraflores cliffs, even the sea looked inviting, though it is notoriously cold.  Within ten minutes of the sun appearing, half a dozen paragliders took off from nearby rooftops, and the sky was alive with activity.

Lima never ceases to amaze. On the way back to the airport a spiderman did handstands, and then helped a really old lady across the road.