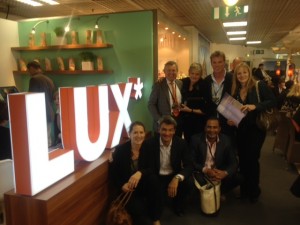 Luxury travel shows are really tiring for any gal, but there are darts of humour as you traipse what seems like miles of aisles here at Cannes ILTM.

Today, for instance, there were some of these serious businessmen – ‘cos everyone in travel and tourism is serious, stupid.  This is a nine billion dollar industry. But some were wearing fuchsia hats, the colour I imagine Clara Bow’s lipstick was.

At Lux* (for luxury, with an asterisk after), lots convened, simultaneously, to hear about these new low-glitz luxury hotels. 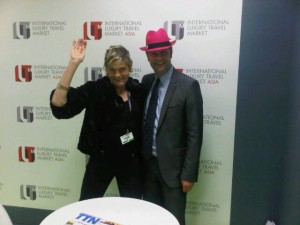 The guy who has conceptualized the brand, Piers Schmidt, flew in from Cape Town.  He did One&Only too.  At least Lux* has no ampersand but it does have an asterisk.

And then there are parties.  Lungarno hosted in the Croisette boutique of its owners Ferragamo. It was pretty glam drinking their own Ferragamo Il Borro 2007 Toscana, from vineyards 45 minutes’ drive from Florence – its villa, a former royal hunting lodge built in 1848 by Prince Hohenlohe, is now a nine-bedroom beauty where they hold cooking classes.

Talking of beauty, Miss Italy was at the party, on her way to the annual American Academy bonanza at the Martinez. 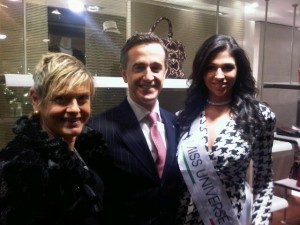 The party was actually hosted by Lungarno CEO, the divine Milanese Valeriano Antonioli, who also happens to be the author of  Passione e Cucina: Eating, Drinking, Flirting, published in 2003.

Wow, now the gal knows that there is one cabin on the Milan to Paris train leaving nightly at 10.30pm that has one cabin, and only one, with a king-size bed… 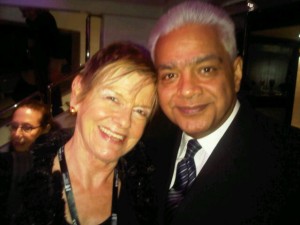 Amazing what being inside luxury travel does for female knowledge!  And amazing for self-esteem is drinking Il Borro standing by a rack of Salvatore Ferragamo frocks (the gal wore her Ferragamo shoes, of course).

And thank goodness she left her Louboutins behind to go to the Hyatt party, cos it was literally walk the gangplank to get on the boat. International president of Hyatt, the lovely Rakesh Sarna, was captain of the moment, and somehow a Mexican band had got onboard, making lotsa noise and taking up lotsa room.