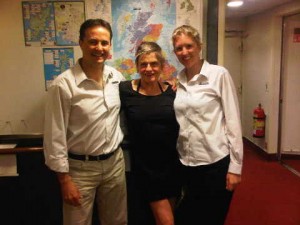 What is it like living aboard a luxury expedition ship?  That is what Robin West and his wife Jarda Versloot do, or at least for 230 days of every year.  They are full-time employees of Silversea Cruises, working as expedition leader and coordinator on the Silver Explorer.

They do 230 days aboard, and a further ten days a year in the company’s head offices in London and Monte-Carlo.  The rest of the time, namely 124 days, is holiday time, probably back home in the Netherlands. 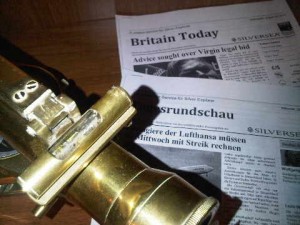 Jarda publishes a daily chronicle of onboard events, but passengers also get potted news from their home country

They met in Robin’s home country, South Africa, when Jarda, then at hotel school, was sent to do a stage, intern spell (as she says with a characteristic smile, ‘we fell in love, there and then’).  Robin was tour-guiding, running his own incoming destination company.  His good friend Conrad Combrink was expedition leader on the World Discoverer, which is now Silver Explorer.

Conrad asked Robin to join Silversea, and of course Jarda came too (when the Wests are on home leave, by the way, Conrad, who is overall head for expeditions for Silversea, diverts from Ecuador, where he is converting a Guayaquil-based ship to be a Silversea expedition ship dedicated to the Galapagos, to head Silver Explorer). 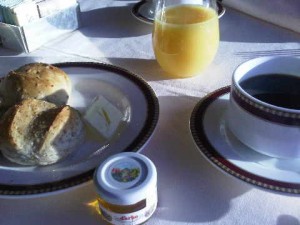 Some have a simple breakfast (it is help-yourself, from a copious buffet)

But when they are at sea, they work, seven days a week and many hours in every day.  Robin reports to the Captain, and is the link between the bridge and the passengers.  It is he who makes passenger announcements, and organizes daily programmes, and tours, excursions and expeditions.

Jarda’s specific roles include liaising with destination management companies, who organize those tours and excursions as well as passengers disembarking from the last cruise and others boarding for the next one.

She writes the daily one-sheet Chronicle, outlining tomorrow’s schedule – on Silver Explorer, all tours are included in the overall cost.  As representative for Silversea’s Venetian Society loyalty programme, she hosts the Venetian Society cocktail that is a feature of every cruise. 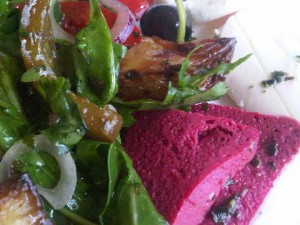 Lunch, also a buffet, can offer a colourful palette of foods

Both are actively involved, too, in every off-ship activity. For this they are helped by contract specialists, onboard for a certain number of cruises (all have to have Zodiac safety training).

Every off-ship activity involves counting passengers off the ship, and back on it again. How many got on to a coach (which of course has at least one expedition team member aboard)? Has anyone ever been left behind (no, of course not)?

If there is an expedition leaving in Zodiacs at 0300, does the chef know that breakfast needs to be served at 0200 (yes, of course)?  The expedition world is small, and its network means word-of-mouth bring on the right people at the right time. 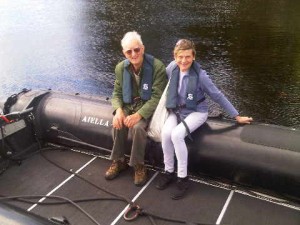 Passengers waiting for a zodiac to fill up

This particular cruise, from Tromsø to Dublin round the North of Scotland, carries nine contract specialists – but there can be as many as 13, as on the previous cruise to Franz Joseph Land, when four Russian Arctic experts and bear guards were also needed.

This cruise we have Dr Colleen Batey, the Viking specialist, and Austrian Hans-Peter who makes flowers come alive, and Juan, from Colombia, who does the same for geology.

And Avielo – her family name, which she goes by as her first name is also Robin – is marine biologist, explaining the differences between whales and fish (the former thrash tails up and down, their blubber acting as an inbuilt pogo-stick, while the latter wave from side to side), and Kara, a general biologist who started out as a musician, seem able to talk about anything… and so on. 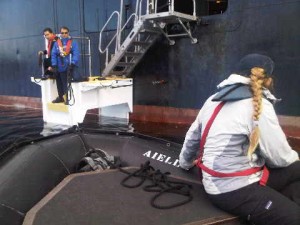 Unloading zodiac passengers back to the ship

The photographer, Richard from New Zealand, is producing an onboard video that you can buy as a sensational souvenir of the trip.  He is always first into an expedition, and he somehow sees things that others do not.  He and the rest of ‘the team’ sit together at breakfast, and lunch.

The ship’s doctor, a Swedish surgeon enjoying this sinecure, alternates between sitting ‘expedition’ and sitting with the officers at the next table.  They can all eat in the crew mess at any time, which they certainly do at dinner: only the full-timers, Robin and Jarda, have to wear uniform after 1800 (these two have the privilege of dining whenever and wherever they want, including room service in their cabin). 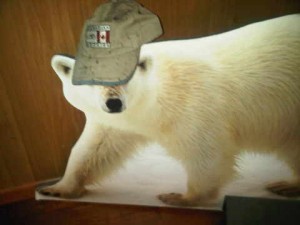 A polar bear (cut-out, of course), waits in the theatre for the next recap session

All the expedition staff take part in the daily Recap and Briefing, which we naughtily call ‘rehab’.  At a set time passengers gather in the theatre, which has seats that are far too comfortable for keeping awake, and fixed tables for the drinks brought to order.

Robin briefly outlines tomorrow’s timings, and shows the weather, and then his team spend a few minutes each explaining things we have just seen, or may see tomorrow.  Hans-Peter shows close-ups of lichen, a pairing of algae and fungus (there are 25,000 known species).

These people are also researching ahead: 2014 will see Silver Explorer going through the Northwest Passage on the way from Europe to the South Pacific. But honestly, says Robin West, his job is not so much about where the ship is going as knowing how to run an expedition.