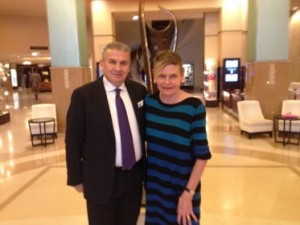 Claudio Ceccherelli at his hotel…

Claudio Ceccherelli was probably king of the castle, in terms of luxury hotels here in Cannes, as far as ILTM 2014 was concerned. He was personally in the main lobby of Hôtel Martinez Grand Hyatt Cannes from mid-afternoon on the Sunday, ready to greet those delegates staying with him as if they were his closest and only friends – he is a former Virtuoso ‘hotelier of the year’, which shows how travel advisors love him. Somehow his team similarly treat everyone uniquely. How did his breakfast team know instinctively which is the gal’s favourite table, and how did they always happen to have a plate of fresh-cut mango just ready and waiting? 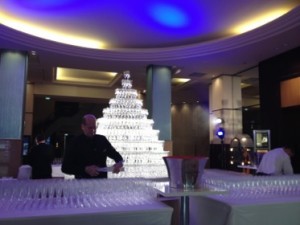 .. before the lobby was turned into a party venue

On the Tuesday night, the elegant marbled lobby of the Martinez was cleared, and a cascade of Champagne glasses set up for the ILTM party – yes, for all 4,000 people taking part in the show. It cleverly starts after dinner, so you can eat whatever, wherever, and then come and drink, and dance on the revolving floor, and generally network yet a little more (it seems these people can never do too much networking). Two nights later, Claudio Ceccherelli was hosting again, when Hyatt, as a group, turned its seventh-floor rooftop suites into a journey of different cuisines, a journey that flowed from room to room and out on to the balconies, looking down at the Croisette and its palm trees already lit up for Christmas. 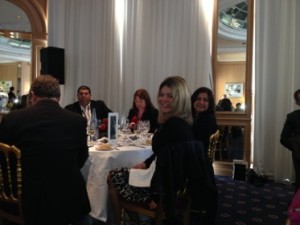 Peninsula hosted a magnificent breakfast with food enough to last all hungry media all day long, if necessary – we heard about The Peninsula Shanghai‘s new own-label caviar, and ancient Whisky, and, company-wide, post a picture of the company’s soft toy and you might win a prize, benefiting charity. There were daily lunches: InterContinental hosted one, a seated affair with speeches that did actually interrupt the networking. But we heard that IHG is bundling its InterContinental and Indigo brands together, run by Didier Boidin, who perhaps can now start, once again, his beloved hobby of rearing bonsai trees. And we heard about the ‘new’ Lisbon InterContinental, a veteran building that is being rejuvenated. 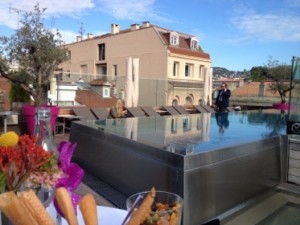 .. and Michaela Guzy attends to urgent messages outside Shangri-La’s buffet

Shangri-La, by contrast, hosted a buffet lunch that cleverly allowed the hungry to eat enough nori-wrapped tuna skewers to keep them going – or you could, like Michaela Guzy, OhThePeopleYouMeet, head outside to the sunlit terrace, to catch up on messages. Yes, everyone at this luxury hotels’ meet-up had to continue running their businesses while being part of ILTM.