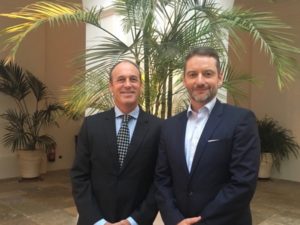 The name Marbella Club tells you where it is, but you do need to know, and ideally experience, that this Mediterranean-set complex is in fact a mammoth offering of sports and wellness, restaurants and bars, plus two, soon to be three, luxury hotels. The gal wanted an update since her last visit, five years ago. Sadly, the complex’s colourful ambassador, Count Rudi – Rudolf Graf Schönburg-Glauchau-Waldenburg, vintage 1932, was otherwise engaged, but I was brought up to speed by lightning-quick, no-time-wasted complex MD Shaun Leleu. He has, by the way, been in southern Spain for many years, back to when he was in training for a professional tennis career, and now, as a highly-skilled accountant, he is ideally placed to take what is MC (Marbella Club) Hotels forward. He still plays tennis to keep fit. He also, by the way, walks at near Olympic pace – the tour included going past a plaque to Melvin Villarroel, 1931-2010, architect of Marbella Club, which opened 1954 with ten rooms. 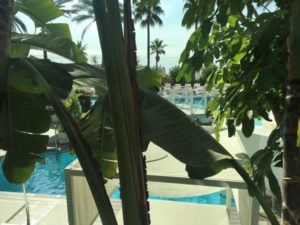 MC Hotels has already expanded to Bora Bora, and California, and Ibiza, and in the mountains two hours’ drive from Marbella. Here, on site, everything looks more spic and span than ever. What will eventually be an 80-room Nobu Hotel is being formed, marsupial style, out of the Puente Romano Beach Resort & Spa here: the first 49 rooms, with dedicated reception and breakfast room, will open April 2018, with the remainder coming online in 2019. This will undoubtedly both complement, and give yet more business to, the already-open and highly popular Nobu restaurant and bar. Shaun Leleu likes partnerships – he handed the complex spa to Six Senses a couple of years ago and what a great job has been done. 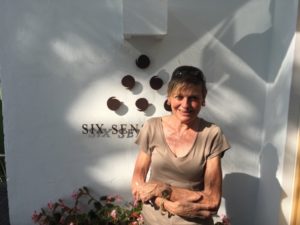 Six Senses has put in an arrival boutique with stunning selections of bright coloured dresses and scarves as well as the Biologique Récherché products that are used in the treatment rooms – which are, like the relaxation area, almost Scandinavian in their aura of white paint, pale wood and hints of blue. There is a 60 by 60 ft indoor pool here, too, but there are also several outdoor pools dotted around the total-29-acre complex. One pool will be reserved for Nobu Hotel guests. One of the other, general use pools is, as shown above, elegantly themed for the adjacent Rachel’s icecream parlour. It does not matter which hotel you stay in, by the way, you have signing privileges, wherever. 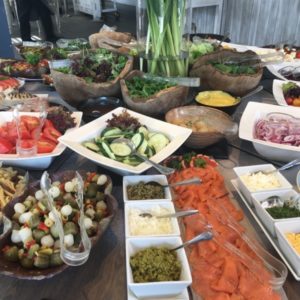 All restaurants and most other facilities are shared between Marbella Club and Puente Romano, which is more like a village. Its headman, also known as GM Jorge Manzur, from Mexico City, walked me along one of its winding pathways to a three-floor block where I had a lovely dayroom, suitably light-and-bright for the locale – see a video below. We joined some of the Beautiful People who rightly typify Marbella, and this complex of luxury hotels, in a speed walk along the shoreline’s boardwalk. Then we headed to the SeaGrill, designed by Andrew Duncan. Although they will later serve an Andalusian afternoon tea here, we were there just as they were setting up one of the best lunch buffets I remember in a long while. This was healthy eating epitomised, and after that Shaun Leleu headed off to pick up his racquet. FIRST, WALK THE BEACH AND THEN SEE WHAT A PUENTE ROMANO SUITE LOOKS LIKE, BELOW