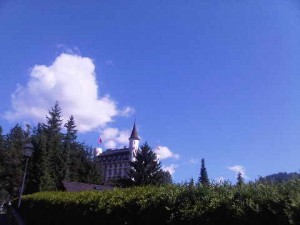 The Palace Gstaad is a fairytale castle, with turrets

Getting to a destination is always a relief.  Arriving at Gstaad rail station, the gal was met and driven, sadly only for five minutes, in the two-week old (sic) Rolls.  Presumably some of that fortnight had been taken in driving the beauty from UK, for that is her number plate.

Perhaps she was requisitioned from one of London’s libor bankers, anyway, she is now in the most beautiful home, the one-and-only Gstaad Palace. The highly-diagonal road makes two big twists up from the station and there you are. 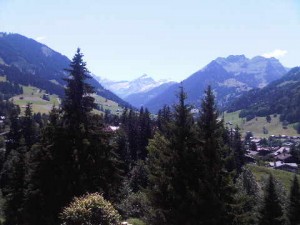 I go up red-carpet steps to the front lobby, which has a certain amount of gemütlich woodwork and a frescoed ceiling and a De Grisogono shoplet.  I am taken up to room 318, and look out at wooded mountains, the Wasserngrat with the famous Eagle Ski Club to the left, the Wispile to right.

The air feels 100% pure. The room is a Swiss version of Pottery Barn, soft taupe and softest plum (the drapes and circular cloth, floor length over an occasional table, are plum-embroidered flowers on linen). Through the open French windows on to my petit balcony I can hear the steady raindrop-like noise of tennis from the four clay courts down to my near left. 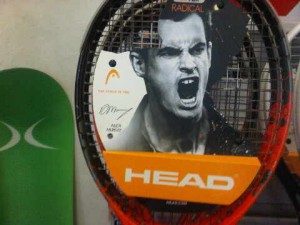 The sports boutique outside the hotel’s front door has thousands of bits of ski equipment, and also a range of tennis gear. A display of Head rackets has black and white photos temporarily stuck on them. Andy Murray is scowling and, seemingly, swearing (never mind, his Sfr259 racket is only for beginners, while Novak Djokovic’s Sfr289 racket is for more advanced players).

This 100-room luxury hotel offers, during its winter and summer seasons, amazing shopping.  Buy anything for sports, and golly, watches galore (especially Hublot, a major partner). 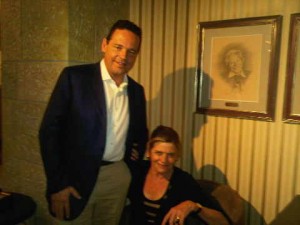 Andrea Scherz, co-owner who runs this Leading hotel, tells me its history. A schoolteacher thought that if Swiss lakes had palaces, why not mountains? The hotel opened in 1913, with 160 rooms (shared bathrooms and toilets, but individual china chamber pots).

His grandparents ran the hotel during WWII, when the nation’s gold was stored in bunkers below the building. In 1947 they bought it: their son Ernst, father of Andrea, is now its chairman. 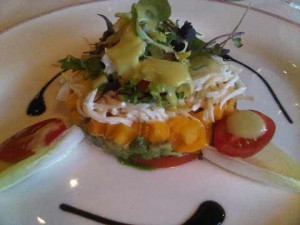 Salad of avocado and mango

English food writer Michael Winner is probably coming back this Christmas, when 90 percent of guests, staying a required minimum 12 nights, are repeats.  Food, therefore, is a big draw.

We – I am with Scherz not Winner – dine in Le Grand Restaurant, where an all-male team is led by Italian Gildo Bocchini. Wearing. as always, the maize-yellow eyeglasses he gets in London,  greets most of the other guests as old friends.

We sit as far as possible from the three-piece band as we want to talk.  We both start with a salad of white mango and avocado, which comes quickly, already on the plates.

The main course is traditional silver service, with a linen-covered side table rolled up to hold the warming plates, and the serving dishes under their silver cloches. The bottle of Castello Luigi Merlot 2007 Rosso di Ticino is in a silver holder, and poured straight from that into tall-stemmed glasses. 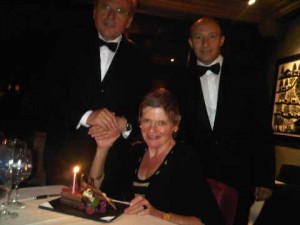 And then there is a surprise – Gildo comes up with a cake (how did he KNOW?) and a few, but not too many thankfully, sing an appropriate once-a-year ditty.  In winter, Gildo has his own restaurant here, Gildo’s, an offshoot of Il Pellicano in Porto Ercole  Must come back for that, sometime.

Gildo is full of surprises.  He is, for instance, also on duty at breakfast – how many maitre d’s make it to breakfast?  Not enough, in my opinion.  But then there are constant surprises here.  The hotel has started kids’ spa sensations, with very-light 25-minute massages and unlimited use of thematic showers in the hotel’s fabulous spa (Cinq Mondes, again). 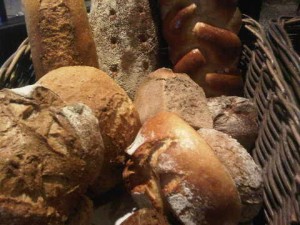 In the morning, since the Technogym does not open until 0800, I jog up Wanderweg 37 (all the hiking trails are numbered).  Being Switzerland this ‘way’ is perfectly signposted, up near-diagonal roads and through near-vertical hay fields into seriously-near-vertical woods.

I slither back down, hungry for breakfast. I read the International Herald Tribune, which was hanging outside my door in a fabric bag, and then I walk back along the main corridor, past mostly-Hublot but also some other elegant back-lit vitrines. 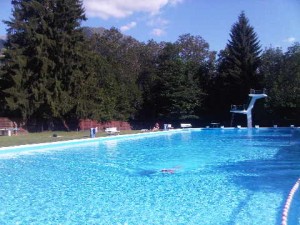 The outdoor pool has a proper, old-fashioned, diving tower…

Post-breakfast, I take a walk through the semi-underground deep taupe secret-journey area that is wellness, past saunas and hammams and spa areas to the indoor pool (a ceiling-high platform above the water lets down, winter weekend nights only, to form the GreenGo nightclub, very clever!).

I see the heated outdoor vitality pool, and a terrace restaurant beyond, and I walk around to the outdoor pool, Olympic-sized and with a proper two-height diving board.  But it is too soon after all those bread rolls and the water is still a bit cold. 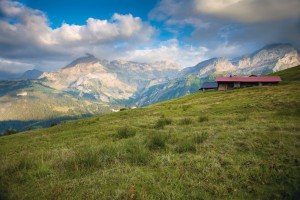 ..and it has a proper alpine hut for adult sleepovers

Next year this iconic luxury hotel celebrates its centenary with many special events, and planting 1,500 trees. Last time I was here, Andre Scherz and his father hosted dinner up in the Walig Hut, half an hour’s gruelling drive up above the treeline as it is now.

The 1786-inscribed alpine hut high has no electricity but at least four times a week hotel guests opt to have served dinner, and overnight (under thick furs) up there.  One New York hedgie, who won the experience in an auction, apparently flew in by private plane and after a few hours claimed the ‘reality’ of being up there changed his life…