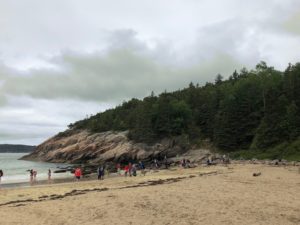 When you are having such a good time on a ship why leave it, asks the gal, if only for a few hours? Well, one of the many lovely things about the Regent Seven Seas Cruises concept is that every day, unless you are at sea, there are countless expeditions and experiences and most of them are free. Today the good ship Seven Seas Navigator was moored off Bar Harbor ME, the third largest island off the eastern seaboard of the USA (for the record, Long Island is biggest, followed by Martha’s Vineyard). Bar Harbor is 105 sq miles in total, and 47,000 acres of that is taken up by Acadia National Park, entirely formed of donated land. 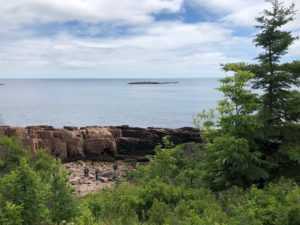 Roughly a third of Acadia National Park was given by the Roosevelt family – having been settled from 1763, the island became, from the end of the 19th century, a retreat for big names of the calibre of Astor, Roosevelt and Vanderbilt. The first hotel here was Agamont House, finished in 1855 by Tobias Roberts.  By 1880 apparently there were 30 hotels, most of which were sadly later razed during a catastrophic fire, in 1947.  Today, search for a luxury hotel and your eye probably goes to Bar Harbor Grand, which looks stylish outside but inside décor is great if you want everyday classic from the last century.  Interestingly, many rave about Holiday Inn, and its food. 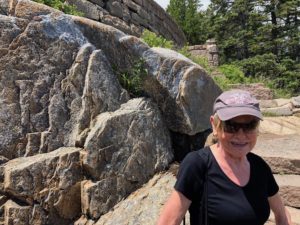 But people obviously do not go to Bar Harbor for its hotels.  They are attracted the beauty of the topography, especially Acadia Park, which has seven peaks above 1,000 feet, plus 158 miles of hiking trails, and 45 miles of carriage roads with 16 stone bridges. We hiked a two-mile stretch of its coastline and we were not alone. There were many hundreds, mostly families and often with toddlers or even younger, doing the same thing.  Our guide introduced us to flora and fauna, including poison ivy and treetrunk holes made by woodpeckers.  It was all, actually, commendably uncommercialised, with no plethora of signs warning you not to do this or that. 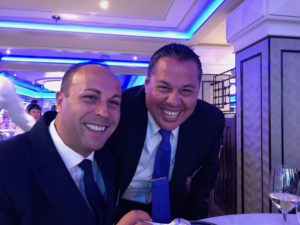 Only 5,000 live on Bar Harbor year round, but each summer there are about 3.5 million tourists, flying in, sailing in or driving over the causeway from the mainland. The number of visitors is causing general consternation and currently, until June 26th 2018, anyone can put forward ideas for tourist-control (go to http://go.nps.gov/AcadiaPlan).  I am really impressed by the management of the park. An artist in residence programme, for instance: at last opening, over 190 applied for a free two-week stay in return for donating works to the Park, and the seven lucky winners, who will be on-island this September, are painters Natalie Andrew, Charlie Buckley, Sue Charles, and Johanna Finnegan-Topitzer, plus writers Andrea Lepcio and Kim O’Connell and composer Rachel Panitch,   Now, I thought, we simply need to get at least one luxury developer to start a significant hotel here and the bar will begin to rise. Meanwhile, back onboard, it was lobster time, and GOSH they were good….